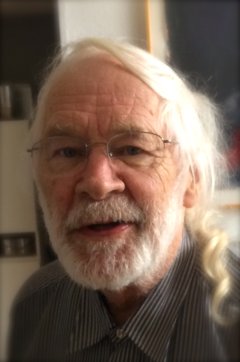 "It is with great sadness that on November 8th we lost my Husband, our Father and Opa at the age of 78 just two weeks before his 79th birthday.

He was born in Leeuwarden The Netherlands on November 22nd 1938.  He emigrated to the United States in 1958 and returned five years later to marry his childhood sweetheart on February 12th, 1965.  He worked many years as an art director for Los Angeles city planning.  As he continued to evolve as a painter, he also designed and built a home in Malibu CA, and developed a line of greeting cards under the name "Hanke Design Company".
He continued painting up to this year during his illness and shortly before his passing.

He leaves behind him his wife, son and daughter, one grandson and three granddaughters

A memorial service will be held January 26th 2018 at 1pm at the Jansen Art Center in Lynden, WA

He will be greatly missed"

My deepest condolences to the Kunst family.  May your precious memories of happy times spent together with Johannes help ease the pain of your loss and may it be comforting to know that during difficult times you can throw your burdens on our Heavenly Father and he will sustain you. Isaiah 41:10; John 6:40. Heartfelt prayers and loving thoughts are with you.

He leaves behind him his wife, two son and daughter.