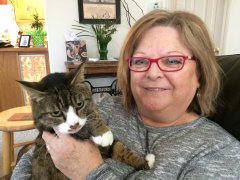 Linda grew up in NW Washington, starting out in Bellingham, then moving to the corner of Kickerville and Brown Rd.  She attended Custer and Ferndale schools, was a Cheer Leader, member of the photography club, assisted with the school paper.  She raised a heifer for 4-H and was in a Blue Birds group. She worked at several local restaurants and Ferndale Pharmacy.

She attended Zion Lutheran Church from a young age (thanks to faithful uncles who would drive from Custer to Bellingham and take her back to Zion for Sunday School).  This is where she also met her “husband to be” Jim.

When she was 15, she invited Jim to a Tolo (older folks will remember those…). It was a dance where the girls invited the guys.  This was their first “official date”.  But at the last minute, her friend, Marge, invited her to attend a “Youth Group” dinner at Sunrise Baptist Church – so that replaced the Tolo… and began ~30+ years at Sunrise.

Linda and Jim dated for several years, before Jim proposed.  In 1973 they exchanged vows at Zion and were married nearly 44 years before her passing.

She enjoyed coffee with her friends, really got to like going on Cruises (Alaska & Mexico) (“Someone else did all the cooking!”  And she shopped until Jim dropped…!).  She took “Jack” to Dog Shows and she was proud of his ribbons.  She loved flowers & nearly any plant (except Ivy!!!).  She baked the best pies – for many years she baked 52 pies – one (or more) per week!  Thankfully Jim had a fast metabolism and they didn’t start to “stick” until later in life!

Linda’s greatest joy was her kids – John & wife Lisa and Holly.  She was at every concert, play, game, or other school or club activity.  She helped plan some of the best family vacations anyone could ever have!

John was our first child (“The Practice Kid!”) (Every parent knows what that means…you keep trying different things – always trying to do the best you can!!!).  Then several years later Holly joined the family.  John was the best “Big Brother” any girl could have.  Linda’s health issues (from the time she was a youngster) were not getting better and John helped her out a lot!

Her marker will be at Enterprise Cemetery, between her mother, Barbara Miller and her Uncle Wint Miller.  She gets to hug her Mom again, in Heaven, just a few weeks after she passed.

Memorials donations in her memory can be made to Sunrise Baptist Church, Custer, WA, or to Christ the King Church-Bellingham, 4173 Meridian, Bellingham WA 98226.

Our deepest sympathies to you are your family.

Jim , and family, I am so sorry for your loss. My prayers are with you all through this difficult time. I wish I could make Linda's ( My cousins) memorial,  Linda was such a wonderful Lady. She will missed by many, Paul and Connie Hill

What a beautiful service and tribute to Linda! She must be smiling. Joey McAlpine, classmate FHS 1971