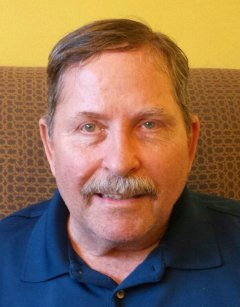 Born January 17, 1951 to Warren and Edith Shorthill, John was raised in Livingston, MT, by Warren and Carroll Shorthill.

He went on to graduate with honors from MSU in Bozeman, MT. He later graduated from seminary.  John had a career as the ambulance director of Rosebud County, MT, and later pastored various churches.

John was married to his best friend, Brenda (Beekman) Shorthill for over 46 years.

He is survived by his wife, children; Sasha (Shorthill) Brodeur (spouse Adrain Brodeur), Jacob Shorthill (spouse Holli (Crawford)Shorthill and grandchildren; Joe, Ava, Berkeley and Kaid. He passed away on October 11, 2017 in Bellingham, Wa.

My dear Brenda and kids, my heartfelt sympathies go out to you.  This is such a sad time for all of you, but rest in the sure knowledge that John is in heaven, probably laughing with Jesus and Bob about some of the things they said and did  (like being in "deep kim-shee"), remembering happy times and asking Jesus all the questions we never had answers for.  I saw very little of you guys in recent years, so I will always remember John as being full of life and love, laughing out loud and always, always having a heart for ministry..  Cynthia Bateman

To my dear friend Larry and all of the Shorthill family. My deepest condolences at your loss. I didn't know John, but he sound like a grand man. I hold you in my prayers during this sad time. We can be sure that John is now free from the bonds of his terrible illness and safe, peaceful, happy, and whole in the arms of his Saviour, Jesus Christ. Therein lies our solitude too.

I knew John in his "wild youth" and can say he was always a gentleman to the core. Happy trails John.

Very Fond memories and from Livingston and John's youth.  So many good times at my home with my family.  With love and sadness for you all from Carol Briggs.

Brenda and family, we are  so sorry to hear of your loss,  peace be with you and your family at this time.  Sincerely Debbie and Ted and Debbie Leckner