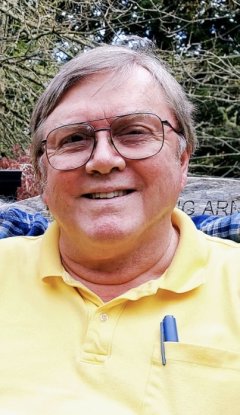 He and the love of his life, Jerri, met through their fathers and were married February 21, 1976.

Steve is survived by his brothers Don (Linda) Williams, Jim (Patricia) Williams, sister Barb Williams and many nieces and nephews.

He is preceded in death by his wife Jerri Williams, parents Darlene and Eugene “Willie” Williams and nephew Andrew Barcome.

Steve was self-employed most of his life. Steve loved boating amongst the San Juan Islands with Jerri.

He later enjoyed traveling and trying new foods. Steve took great pleasure in firing up his Traeger and making some finger-licking good BBQ.

His stories left us all longing to hear just one more with the expectation that he always had more to share.

Steve had a sense of humor that was unlike any other. He had an innate ability to find the humor even in life’s more serious moments.

Steve went to Camas in his Junior High years.
I remember him well. Always smiling n a big tease.
We were all lookin forward to seeing him at our Camas High reunion in Sept. I'm glad we got in contact durin my time tryin to find classmates.
RIP Steve......We will miss you !!!

A classmate from Camas, Dave Yang, said Steve lived in Bellingham, we ought to get in touch, this last April. Rather shyly, I did. One of the best risks I ever took! Steve snd I emailed at least twice a day, catching up from years so far ago. My husband and I had him over for dinner ...wish we would of had at least one more personal visit. Steve shared stories of the love of his life, his wife Jerri. He shared other, personal and deeply heartfelt thoughts about people he loved and knew ,both past and present. I felt honored to " hear" his heart. He eagerly was looking forward to the Class of 70, 70th birthday party this September. On July 4th, he was in the hospital. I asked if he had enough attention....his last message was..." They love me." I fell in love with him, too. Not as a youngster love, but as an older woman reconnecting with a dear friend from so many years ago. Our friendship was brief, but so full. I miss Steve so very much. Such a romantic, kind heart.

Steve was part of the 1969 Summer AIFS Europe trip.  A wonderful experience we students all enjoyed so much. Steve was one of two boys with a big bunch of us girls.  He was a nice kid, a good guy.  I remember he was elected to give a thank you speech and memorial plate to the University at Bangor Wales as part of our good-bye ceremony/dinner before we left to board our cruise ship in London.  He was very good at finding our lost contact lenses too---one time on the deck of the ship in the Agean Sea.  He wouldn't stop looking and found it in a grate by the pool!  We had a 50 year reunion of our group in 2019.  Once again, Steve was nice, helpful guest, and had a few funny recolllections of our trip to share.  He mentioned how much he missed his wife and that they'd had a very happy marriage.  My condolences to the family.

This is a test message by WCF.

Without a doubt, my most unique and special friend.   Many memories…….

When his family moved back to Bellingham, Steve stayed with my family to finish out his sophomore year, as I remember it, which gave our friendship a special layer.

Even then, Steve was an entrepreneur….having a floor cleaning/waxing business with JC Penneys and Sprouse Reitz as customers, making 5+ times the minimum wage at the time.   Upon leaving for Bellingham he “willed” his business to brother, Bob, and me.

Sharing a love for snow skiing, our plan was to do a 1 month skiing trip when I graduated from college.   I am certain the idea was Steve’s, inspired by the adventures in his favorite TV series, “I Spy”, starring Bill Cosby and Robert Culp.   We made this happen the winter of 1975, visiting Sun Valley, Utah (the Salt Lake City area) and then Lake Tahoe’s Heavenly Valley.   As an entrepreneur Steve was comfortable as a risk taker, so we purchased a book on how to win at blackjack.   After practicing the entire trip, Steve tried the methods out in Lake Tahoe.   After some initial success, the casino switched dealers and began re-shuffling after every hand, and his winnings quickly returned to the casino.   Steve had minor successes with the nickel slots, coming out ahead, but I could not even spin any “cherries”, which would return a few nickels.   Finally, one day I asked Steve which slot machine he would “play second”….so I finally spun a few cherries, but quickly those nickels were returned to their “natural habitat”.

In recent years, Steve developed a love for Traegering and would email pictures of his succulently (a Steve type of word) prepared creations.   I finally needled him about how monochromatic (shades of brown) and unbalanced (never any veggies) his meals were.    So, the next picture he sent to me included a box of frozen peas on his plate next to his beautifully Traegered meat.    Every picture thereafter included that same box of frozen peas.

Steve had such a way with words….everyone in my family always enjoyed reading his missives (another Steve type word).   You always wanted to read every word because he could really “paint the picture” in a uniquely descriptive way that drew you in.   The bonus was always his subtle humor embedded throughout, adding to the adventure of his thoughts.

Jan, you were the right person at the right time for Steve.   You (especially you) and Harte greatly touched him and re-lit a light that had been dimmed by the loss of his beloved Jerri.   You were the only one who could have convinced Steve to attend our upcoming Class of 70/70th birthday celebration.    Also, many thanks to you, Sharon, for all your efforts in helping all of us to “re-connect”.   It was at one of our (your) lunches earlier this year that allowed me to “connect the dots” (Steve/Jan/Bellingham) that Jan followed through with.

Steve, my friend, you will be missed, but not forgotten…and now re-united with your beloved Jerri.