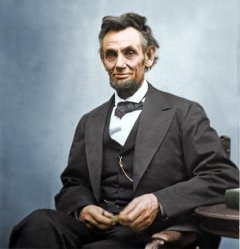 Abraham Lincoln Feb. 12th, 1809-April 15th, 1865
Devoted father and husband, preserver of the Union,
Man of conviction, defender and liberator of those held in bondage.
Commander and Chief of the Armies and Navies which crushed the rebellion of 1861-1865. Protector of the rights of man, faithful to the Democracy set forth by the "Founding Fathers".

Out of the ravel of rumors and rememberances, stands firm the man, the truth, who can not be dismissed by an assassin's dreadfull hand. Our beloved Lincoln; He is gone: He is dead, but the Nation grieves and lives on, because of him.

Walt Whitman, poet and admirer of Lincoln wrote in "Leaves of Grass", of this fallen hero of the American Union:

O Captain! My Captain! rise up and hear the bells;
Rise up-for you the flag is flung-for you the bugle trills.
For you banquets and ribbon'd wreaths-for you the shores a-crowding.
For you they call, the swaying mass, their eager faces turning:

Here Captain! Dear Father!
This arm beneath your head!
It is some dream that on the deck,
You have fallen cold and dead.

This is a sample obituary showing the features that are available for families. You can add multiple photos as shown above and there is no limit to the number of guestbook comments that may be submitted. The obituary is available online for as long as the family wishes. We do not sell anything on our obituaries nor do we charge beyond the initial set up fee. You are free to contact us to make as many changes and updates as you wish as long as the obituary is listed. For additional questions please contact us at 360-734-7073.