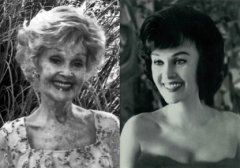 A coloratura soprano, Ginny toured all the lower 48 states as Virginia Carroll. She met Jack onstage in American Savoyards, a year-round Gilbert & Sullivan company. They married in 1954, after Ginny won the Arthur Godfrey Talent Scouts competition on TV. The New York Times pronounced her a "splendid singer", and said "even the D'Oyly Carte could learn from" the Frymires' Kabuki production of Mikado for Village Light Opera Group, which they then re-mounted by request for New York City Opera. But their favorite directing venue was College Light Opera Company (CLOC) on Cape Cod.

"JacknGinny" co-founded Music & Artist magazine for the Waring organization, then took a year off to explore Europe. They retired to Bellingham in 1986 with Ginny's mother. Pearl and dressage horse, Greasepaint. Ginny immediately took to composing (sacred songs and a cycle from Alice in Wonderland). Her voice teacher had rightly labeled her "the Little Genius".

You and Ginny are two of the most remarkable people we have ever met.....full of fun, full of loving kindness and ever so heart-warming to be with you.

Let your humorous streak keep the memories of your life with Ginny alive and happy every day!!

We are here when you want us or need something/anything.

Dear Jack, Anita and I are both deeply saddened by your loss after so many years of life together enriching the lives of countless others by both of your contributions to the presentation of music of the masters of opera, light opera, the classics and the music written for the Christian faith. We wish you, Jack, many more years of contribution to music here and especially supporting music and its resources at both Western Washington University and The Bellingham Music Club. Indeed, we look forward as well to your continuing enrichment of our lives with your wit, wisdom and knowledge of music, performers, conductors and music's history and literature.

We were saddened to learn of Ginny's passing.  Know our thoughs and prayers are with during these difficult times.

I  was so sorry to read of your beautiful wife's death.  I am honored to have known Ginny, even if only a little.  She was the epitome of grace.  Your love for her was abundantly present and that will stay with you forever.

Please know you are loved by many and we're all here when and if you need.

Dear Jack, I am so sorry for your loss. You and Ginny were so instrumental in my growth as a performer. Even now, when I do a show, I sometimes think "but that's not how it should be done" aka the way Jack and Ginny would do it! Please be well, and know that you both have made a difference.

Our hearts are with you, Jack. Ginny and you were among the first to welcome us to town in 2010, and we are grateful for your friendship and support through these years. We looked forward to seeing Ginny with you at music events. She was always warm and gracious, and she was one reason we felt so comfortable in our new home in Bellingham. We wish you comfort and peace.

Please accept our deepest condolences on Ginny's passing.  We are so grateful for the friendship of both of you over the years and will dearly miss those times, but hope that our friendship and contact with you will continue.

Dear David, thank you so much for kind words, fond memories, and a protean ability to carry shows on your back. In our experience there were

many talents but few professionals. Getting two like you and Diane Thomas together in a scene was incandescent (ditto the late Barry Busse).

Dear Jack--Michael and I were so sorry to hear about Ginny's passing.  You two have always been so kind to us and so supportive of me and my work ever since we arrived in Bellingham all those years ago.  Ginny was a lady of class and grace and I am glad to have known her.  We just wanted you to know that we are thinking of you and send all our support and postive wishes to you in the days and weeks to come.

So sorry to hear about Ginny. You all directed me at CLOC in 77 ( as the Governor in Marietta and Village Idiot in Sorcerer). I continued to channel your amazing eye fir precision and detail in my own directing of high schoolers for the next 40 years. Plain and simple: you all changed my life and career as a teacher, director and actor. I can never thank you enough.

Dearest Grand Uncle, I hope you find solace at this turning moment in life... thats what it truly sounds like to me, but maybe I know not, I'm only 42 and your brothers grand daughter here in Austin, Tx. Prayers of comfort to you.. my only grand I have left!! Great glory and respect to you.. I hope you write me many stories to my email soon!! Lots of Love, Bethany