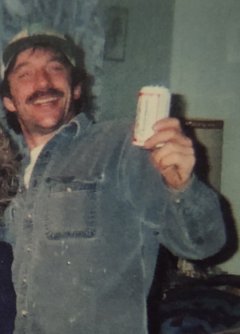 Born:
Thursday, May 6, 1965
Died:
Friday, April 9, 2021
Birthplace:
Bellingham, WA
Service Information:
A celebration of life will be held at a later date, time and place to be determined.

Ron, "the Incredible", passed away peacefully in Bellingham, WA. He was a life long resident of Whatcom County.
He was preceded in death by his father, Elmer C. Nicolaas, mother Betty L. Barnes and his brother, Steve Nicolaas. He leaves behind his son, Jacob Nicolaas, his dog, Sadie (whom he loved very much), his step-father, Frank Barnes, brothers Ray (Peg) Nicolaas and Rick Nicolaas, sisters Shelly Nicolaas and Ruthy (Don) Brown, step-sister Julie (Craig) Daily as well as multiple aunts, uncles, nieces, nephews and cousins.
Ron spent his career working in the family wrecking yard, fishing in Alaska, farming, bucking hay for DeKubber Brothers, working at Recomp, and driving truck. He was known for helping others, loving the great outdoors and putting on a show. His hobbies, which started early, included building and racing demo cars, racing lawnmowers and many others. Ron lived life full throttle until his engine had no more spark. He will be missed and remembered by many.

I first met ronnie when i was 14yrs old.. He was a good friend.. His family was like my own family.. You will be missed my friend.. Until we meet again..