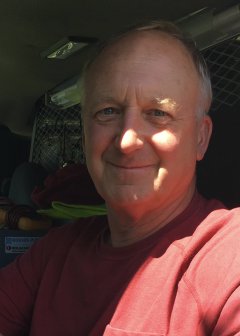 Henry John Weg, known to many as "Curly", was born on August 8, 1952 and died April 26, 2021.  Henry was the firstborn of Hank and Joyce (Heutink) Weg.  Raised on a dairy farm north of Lynden, he acquired a strong work ethic from an early age which served him well throughout his life.
He married Teresa Jacobson in 1971. A son, Jamie was born in 1972.  Together they shared darn near 50 years of marriage.
Henry was a tradesman all his life. He started out as a carpenter with Dick Vellema Construction, later moving on to electrical and plumbing.  In 1983 he opened his own business, Curly's Plumbing, which he operated for almost 40 years.  Henry was a stickler for details and had a passion for "doing things the right way" which earned him many loyal customers over the years.  He got great enjoyment from visiting and interacting with his many long-time customers.  He received many comments for his hand-written invoices with excellent penmanship.
Henry was preceded in death by his parents, Hank and Joyce, and youngest brother Chad Weg.  He is survived by his wife, Teresa and son, Jamie (Tabatha); 3 grandchildren; Emma, Andrew, and Katie;  brothers Randy (Cheryl), Gary (Shari), sister Pat Glass (Al), as well as many nieces, nephews, and other relatives.
At Henry's request no services are planned.  Instead, Henry encourages his friends to listen to his favorite song "Breathe" by Eddie Vedder and raise a glass of their favorite IPA in his name.  He was grateful for the excellent care he received during his short battle with colon cancer, especially from Whatcom Hospice.  Folks are encouraged to sign the online guest book at wcremation.com.
Memorials may be directed to the Nooksack Valley Food Bank, Foothills Community Food Bank, the Blaine Food Bank, or to Whatcom Hospice.
Arrangements by Whatcom Cremation and Funeral.

Maurice and I are shocked and so sad to find out today, on return to Semiahmoo yesterday, that our beloved plumber of 18 years has passed away.

His last visit to our home was 7 months ago.  Jamie, we remember you working with your dad on our house in Boundary Ridge.  We are sorry for your great loss.

Theresa, he would often talk about you and your mini coopers and how you enjoyed living on your property.

We want to express our sincere sympathy to the family.

Thank you for sharing pictures of Curly, it put a smile in our heart to see him.

I heard Henry was sick from my brother Terry.  So sorry. Henry was a great guy.  Everyone respected him and knew he would treat them well. He truly was a craftsman and it was an honor working with him.

I am so sad to hear of Curly's passing. I knew him through the plumbing suppliers I worked for. Curly was such a wonderful and respectful guy. I feel truly lucky for knowing him for several years. I don't think you can find better than him. My best to his family.

To the entire Weg family. Our thoughts and prayers are with you all. Curly was a classmate and the first plumber we would call if the need arose. He helped us out several times and we appreciated his expertise and professionalism. Always good to visit with him.