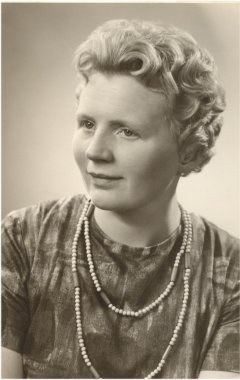 The earth shook a little on April 5, 2017 as a strong force rose up to the heavens and Albertje (“Aly”) C. Vos Johnson left us to be with Our Father.

Aly was born on April 30, 1931 in Alteveer, Onstwedde, Groningen, the Netherlands. There she grew up strong and resilient along with her nine siblings during the Nazi occupation of Holland.

After the war Aly trained as a Licensed Practical Nurse and worked with children in refugee camps in France and Austria. At age 27 her missionary work took her to Dutch New Guinea, where she helped the Dutch government and the Protestant Church establish a home for abandoned children.

Aly’s wandering spirit next brought her to London, England to work as a nanny, and then on to Chicago, Illinois. There she married and started her own family, ultimately settling in Akron, Ohio

Aly devoted herself to raising her three children, to God, and to serving humanity. She volunteered at her children’s schools, in Scouts and her church, and for the Dutch consulate as an interpreter for non-English speaking Dutch prisoners in the Ohio prison system.

In 2008 Aly moved with her daughter’s family to Bellingham, Washington, where she joyfully lived out her life as “Oma” to her grandson and his friends. Aly remained an active member of Christ the King Church until her passing.

Donations can be made to Whatcom Hospice House in Aly’s name.

You will forever be missed Oma!!!!

Best memory of Aly was sitting next to the fire pit in your old backyard Liz.  It was a warm summer night and Aly and I shared a bottle of Liebfraumilch and she shared stories of her childhood in Occupied Holland during the war. I was always so jealous of you having such a vivacious and creative mom. She left a swath of people who will remember her and smile. ❤️

So sorry for the loss of your dear mother, Liz. Praying for the Lord's comfort for you and your family, Love, Janel

I had no idea of all the wonderful things Oma has done. What an amazing woman! Love to Liz, Jeff, Nathan and your extended family.

Your mother was the one who showed me that when life hands you lemons, make lemonade. She grew her own vegetables on a small city lot, cooked meals over a grill with a wood fire, ate healthy, and kept her Dutch heritage alive and educated others about it. I will never forget being at her mothers funeral and getting to know her wonderful brothers and sisters in Holland. She spoke her mind and didn't hold back! That's what made her unique and will NEVER be forgotten. In my heart forever, Renee

There are so many stories of Oma to share as she truly was one in a million!

One of my favorite stories that she told was about the war and conditions that she and her family had to endure during Nazi occupation.

"The Nazi soldiers came in and took everything...our food, our livestock, everything. We lived in fear for years. Even the vegetables that we grew in the garden to feed ouselves would be confiscated. They plucked the carrots and potatoes right out of the garden.

But then the American soldiers marched in and liberated us! Oh, we were so happy to see them! Tall and handsome! They all looked like Cary Grant! (Aly's words! :) )

And they brought soap! Everyone lined up to take turns in the shower and use that wonderful soap! We were finally able to be clean and get our dignity back! God bless those soldiers!"

Aly was such a delight to be around. Her creativity, bold speech, warm and giving heart made everyone love her! I still have her handmade cards that she always so generously gave me! She will be greatly missed!

Thanks Renee. Nice to read your vivid memories to 1990.