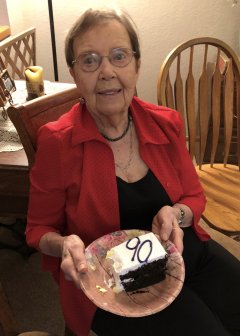 Born:
Wednesday, June 6, 1928
Died:
Sunday, January 17, 2021
Birthplace:
Bellingham, WA
Service Information:
Due to the Coronavirus the family are not able to hold a memorial service at this time, but in remembrance of Andrine, we ask that you take a moment to read her favorite Psalms, 40 and 46.

Andrine Pattison Knapp was born in Bellingham, Washington on June 6th 1928 and passed away peacefully on January 17th 2021 in Bellingham.  She and her twin sister Christine (died 1994) were the only children of Olga (Ecklund) and Leon King Pattison.  Her husband Erwin died in 2016.

Andrine attended Campus School at Western, graduated from Bellingham High in 1946, attended Pacific University in Oregon, and received her teaching degree from Western Washington College of Education.  She and Erwin were married in 1950.  In 1954 they moved to Anacortes where they raised their children.  Andrine taught at grade schools in Anacortes for 30 years, primarily 1st grade, a job she loved.  They were both active in the Westminster Presbyterian Church and the Anacortes Education Association.  After retirement she and Erwin moved to Lake Whatcom where they welcomed family and friends for many years.  As avid travelers they spent a lot of time exploring the USA, Canada, New Zealand, Norway and Sweden.

Sending our love and sympathy to you all at the sad loss of Andrine. So grateful to have her stay in NZ with us, share a holiday as families in Hawaii and recently visit the Lake for a great catchup. Such a gentle, caring  person always interested in what was happening in our lives. Will miss you terribly Andrine such a privilege to have known you and our memories will be forever close to us. You will be with Erwin now singing like an angel in heaven. Hugs ❤️