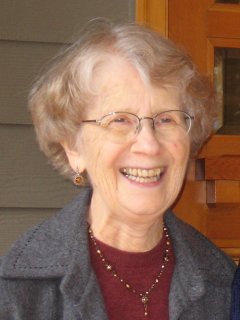 Ann Nugent, writer, historian, and loving mother, aunt, and grandmother, died March 30, 2022 in Bellingham after complications related to a fall. She was 89. She was born in Seattle on January 23,1933, the daughter of Paul Parr and Ellen Ewing VanArsdel. She attended Garfield High School and the University of Washington, where she graduated in 1954.
In 1954 she met her husband Frank (Iannucci) Nugent when they were both seventh grade teachers in California. They married in 1955 and settled in Bellingham in 1961 when Frank joined the faculty at Western Washington University as a professor in the Psychology Department. They became lifelong residents, raising their four children in Bellingham.
In the early 1970s Ann earned an M.A. in History from WWU, and from approximately 1977 to 1981 she worked with the Lummi Nation as a historian, writing publications on subjects such as fishing rights, education, and the Lummi elders.
In the early 1990s she received an M.F.A. in creative nonfiction writing from Pennsylvania State University. Ann then combined her fascination with U.S. history with her love of writing. She studied the memoirs, letters, and sometimes cryptic notes of her ancestors, and visited ancestral homes, cemeteries, and local archives in several states across the U.S. She traced their lives not only to discover and tell their stories, but to write about how American industrialization and other factors profoundly impacted her ancestors’ individual lives and their communities. She was at work on a memoir based on this, immersed in writing it until the last month of her life.
Ann loved spending time with her children, grandchildren, and extended family. She was an avid reader, filling books and periodicals with her commentary, underlines, and question marks. Her other interests included gardening, environmentalism, and social activism, especially where social justice and her religious faith intersected. She was an active member of St. Paul’s Episcopal Church. Her faith sustained her, and in recent years she was grateful to be able to attend the online services and to receive communion from visiting lay ministers, enjoying as well the conversation and connection during these visits.
She was preceded in death by her husband Frank, her brothers Paul VanArsdel Jr. and William VanArsdel, and her granddaughter, Anna Harris.
She is survived by her children Ellen Harris (Tim), Laura (Andrew Ajemian), Michael (Marie Baker), and David (Bobbi Gerlick), her grandchildren Sophia and Emily Harris and Jean-Marc and Celine Nugent, step grandchildren Sara Salisbury (Doug) and Matthew Gerlick (April Mapes-Jordan), her nieces Mary and Julia VanArsdel and her nephew John VanArsdel (Melissa) and their children Laura and Zane.
Donations can be made to the Frank and Ann Nugent Mental Health Counseling Graduate Scholarship:  www.vikingfunder.com/NugentScholarship