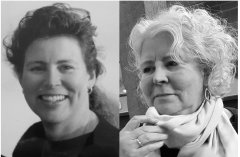 Catherine Ann “Cate” Westphalen was born in Omaha, NE to Paul and Mary (Quinlan) Bausch on October 27, 1949. She graduated from Omaha Marian High School and then Creighton University with a B.A. in Fine Arts (in three years). Following graduation, she worked at ENCOR, also in Omaha, which was the nation’s first comprehensive provider of community-based services for individuals with development and intellectual disabilities. It was there that she met her husband, Mark. Mark and Cate moved to Bellingham, WA in 1975. They have two sons, Zachary and Gabriel.
In 1976 she was contacted by two Jehovah’s Witnesses, in their door to door ministry, and two years later dedicated her life to Jehovah God and this same work. She spent 29 years as a “pioneer” (volunteer minister) committing 70-90 hours per month. She and Mark learned American Sign Language and later Vietnamese in order to share the Bible’s message with as many as possible. Cate also attended Whatcom Community College obtaining further degrees as a paralegal and mediator. She had a perfect 4.0 grade average. She volunteered at Whatcom Dispute Resolution Center (WDRC) and shortly thereafter became their Executive Director for ten years before retiring. She was well known in the community and worked with law enforcement, school principals, teachers, counselors and teens that needed help. In 2005 she was awarded WDRC’s “Peace Builder” award.
She’d touched and deeply affected many people’s lives. She used her brilliance, intelligence, and warmth in all that she did. She was well read, enjoyed deep conversations about what really mattered to the person she was with, could articulate her point of view clearly, and preferred laughter over tears. She was an excellent listener and humble about her many gifts. She was quick to see the potential in others, that they often struggled to see in themselves, and was proactive in providing kind loving assistance to reach it.
Cate was a wonderful wife, loving mother, attentive daughter, amazing sister, affectionate aunt, caring cousin, and trusted friend and colleague. When her maternal uncle (Patrick Quinlan) died in 1998, she wrote a short thank you to those who attended his funeral. Part of it read: “Pat was very much a part of us as he felt concern over our problems, happiness and joy with our successes, and very deeply felt our losses.” Cate could have been writing about herself. She was a fan of baseball at all levels; little league, high school, the college World Series, and professional. She preferred to listen to games on the radio as she used to do with father. She had a sweet smile, a sweet disposition, and a sweet tooth…she never met a dessert she didn’t like, and dessert could be served at any time during any meal.
She passed away on July 24, at home in Bellingham, following a short illness. Cate was predeceased by her parents. She is survived by her husband Mark, her sons and their wives, Zach (Courtney) and Gabe (Olivia), her sister Mary Clare Snow (Ron), brothers James (Pat), Thom (Cindy), Robert, and John (Amy), an aunt, and many nephews and nieces.
If you wish to make a contribution please donate to Jehovah’s Witnesses by way of “donate.jw.org” for the Worldwide Work.