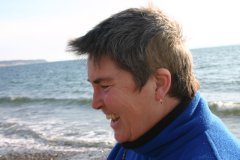 Born:
Thursday, September 17, 1953
Died:
Tuesday, July 27, 2021
Birthplace:
Wenatchee, WA
Service Information:
A celebration of her life will be held at the amphitheater at Deception Pass State Park on September 19, at 1:30 pm. We ask that all stay masked during the event. If you cannot attend, here is the link to live-stream it: https://vimeo.com/event/1267284

A celebration of her life will be held at the amphitheater at Deception Pass State Park on September 19, at 1:30 pm. We ask that all stay masked during the event. If you cannot attend, here is the link to live-stream it: https://vimeo.com/event/1267284

Catherine Verd Carter died suddenly on July 27, 2021, at the age of 67.  A beloved and loyal friend, Catherine had an expansive spirit.  She was a force of nature, a political activist, a world traveler and citizen, and an idealistic troublemaker.  She was bold, adventurous, and curious.  She loved sailing, and once crewed on the Marblehead-to- Halifax Ocean Race.  She had a wide open smile and a heartfelt, ringing laugh.  She was fiercely inclusive and dramatically competitive.  She was fun to be with and had a lot of fun--dancing, pitching softball, playing soccer, basketball, tennis, and pickleball, and hiking and camping.  She was reflective and attuned to her own, and the world’s, spirituality.  She worked for the common good in her paid work and on her own time.  She believed passionately in social, economic, and ecological justice and in doing the right thing.  She felt rage at those who acted destructively or greedily and, in her words, “felt furious and bereft” when others, including herself, fell short in making the world better.  She could be judgmental and say provocative and hard things, even to people she loved.  She had no patience for complacency or pretense.  She looked hard for the truth and called out bullshit.  She could be impulsive and divisive, although she was also a uniter and a healer who made and nurtured families and communities.  She was resourceful, competent, and creative.  She read voraciously.  She was a fan of the Seattle Storm.  She loved nature--raptors, witch hazel and other winter blooms, Fibonacci numbers, wind, deep forests, and the coast of Puget Sound.  She loved maps and words, and trounced all comers at Scrabble.  She painted colorful landscapes of the land she loved.  Finally, and hardly least, she had a beautiful singing voice.

Catherine was born on September 17, 1953, in Wenatchee, WA, to Ann Trenholme Carter and Phillip Linwood Carter, Jr.  At the time, her father was in the Navy and stationed in the Mediterranean.  She and her younger brothers Phillip Linwood Carter III and Anthony Wood Carter (Andy) grew up in Norfolk, VA, Everett, WA, Glenview, IL, and Groton, MA.  Because her parents’ marriage was troubled, Catherine’s childhood was cut short by having to take on the responsibility of caring for her younger siblings.  In 1969, her mother left for good, and Catherine never had a real family home after this.  While Catherine stayed east to finish high school, her brothers went to Washington and then New Hampshire to live with their mother.

She attended Concord Academy, where she thrived intellectually and made lifelong friends, but she was there on scholarship among mostly wealthy students.  During her junior year, Catherine worked as an au pair and housekeeper for a local family for her room and board while attending school.  Recently, she remembered with gratitude that a fellow student had come to help her vacuum, but she felt like an outsider, more because her friends and teachers were largely unaware of her situation.  This past June, she attended her 50th Concord Academy reunion (virtually), and closed by saying, "I really want to know the causes all of you are involved in!"

Throughout her life, she created and nurtured families of choice and circles of friends.  She found her first such family during her senior year of high school, when she moved in with the Chapman/Mitchell family--including sisters Lynn Chapman and Nora Mitchell, who were also at Concord Academy.  Emily Mitchell became a second mother, and Lynn and Nora like sisters.  (At her 50th reunion, she wrote and delivered a tribute to her classmate Lynn, who died in 2017.)  Through the Mitchells she also met Jacob Mihalak, who was like a brother to her.

Her second family was with her partner Kay Wilson and Kay’s children, Rose McCaslin and Michael Esveldt.  In 1980, Catherine met Kay and Rose, when Rose was two.  Catherine was like the Pied Piper with children, and she and Rose got along instantly.  Catherine and Kay became lovers, and Catherine, Kay, and Rose took an epic car trip to visit Catherine’s mother Ann in Sun Valley and Kay’s aunt in eastern Oregon.  Catherine and Kay did not remain lovers, but did remain family.  This long-time friendship came to include Kay’s husband Kurt and son Michael.  In Rose’s words, Catherine “loved me as if I were her own” and “stayed in my life and contributed immensely to my sense of self and belonging as a person.”  Catherine and Rose and Michael continued to have their own friendships as adults, and Catherine officiated at the marriage of Rose and her husband Trae Alimia in 2015.

Her third family was with Wendy Harris, her partner of 14 years, Wendy’s daughters Melissa Wells Harris and Mikayla Crawford-Harris Smith, and granddaughter Aleeza Wright.  One of Catherine’s points of pride and joy was the wheelchair ramp she built for Melissa.  After Catherine and Wendy split up, they remained dear friends from the time Catherine moved to Seattle and for the next 40 years, she was a solid member and leader in the co-counseling community.  And when she moved to Skagit County, she found another circle of beloved friends--her neighbors, comrades in activism, and women’s groups.

Her curiosity and energy took her around the country and the world.  While finishing her degree at Antioch, she visited Northern Ireland and then Israel, focusing on the Protestant/Catholic and Israeli/Palestinian conflicts.  In her early twenties she lived for a time in Indonesia, where she witnessed the destructive impact of corporations and the largely ineffectual efforts by NGOs to mitigate those effects.  These travels deeply affected her worldview.  She also visited many parts of the US, Canada, and Europe.  In the 1970s she returned to Washington State and lived in Seattle, for a time in Arlington, in Seattle again, and finally in Edison.

She did work she believed in: She was an organizer for the Service Employees International Union 1199, a political campaign worker, and a public defense investigator. She also did an astonishing array of other jobs to make a living, and seemed able to pick up and excel at almost anything: She was a camp counselor, preschool teacher, ski instructor, EMT, carpenter, private investigator, photographer, trainer, conference organizer, docent at the Museum of Northwest Art, Lyft driver, sailor, genealogist, substitute teacher and teacher’s aide, bus driver, salesperson at Home Depot, busker, and house- and pet-sitter.

She became a political activist early and stayed active until her death.  In 1977, she was among the hundreds who staged nonviolent civil disobedience at the Seabrook Nuclear Power Plant in NH and were arrested.  Twenty-two years later she was a Sea Turtle during the WTO protests in Seattle.  Her activism promoted civil rights, economic rights, and social understanding.  In the 1990s she worked with Hands Off Washington to protect and advance the rights of LGBTQ+ people.  She was active in PFLAG (Parents and Friends of Lesbians and Gays).  She was also part of the Kadima Reconstructionist Community, a progressive community of inclusion, social justice, and Jewish tradition for Jews and allies, in Seattle.  When she moved to Skagit County, she participated in Democratic electoral politics, especially to promote women and women of color candidates and voting access; Safe and Sane Skagit, a local group affiliated with the WA Alliance for Gun Responsibility; a local chapter of Extinction Rebellion; and the Edison Women’s Club.  This group of women, in particular, sustained her while she lived in Edison.

After living with Type 1 diabetes for years, Catherine had also begun to experience heart problems.  She was setting out for an appointment with her cardiologist when she had to stop and call for help.  Friends came and were with her when she collapsed. She was taken to the hospital and never regained consciousness.  In a last act of generosity to her local community, Catherine deeded her acre of land in Edison to the Land Trust.