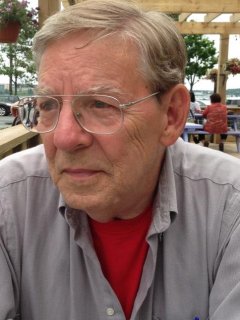 Joe spent his youth on a farm, and attended a one room schoolhouse on Black Island near Hayti Missouri. He spent his teen years hunting and exploring caves along the Mississippi River until he moved to St. Louis inner city for a few years.  After graduation, he served in the Navy for twenty years as an aviation electronics instructor. After retiring from the Navy he became a realtor for a few years and owned Bellingham Realty. However, he quickly returned to his passion of being an electronics instructor with Boeing and lastly with Bellingham Technical College. In retirement he enjoyed hunting, fishing, crabbing, and traveling. He traveled cross-country twice in a motorhome with his wife, Bev Reed, and their cat Latte. He loved gardening, and he was happiest sitting on his John Deere tractor while using it for anything he could think of. He achieved his life long dream to build a cabin in the woods with his son, and he enjoyed the peacefulness of Hull mountain almost full-time in his last five months of life.
Joe was born to Irene Hunt and Virgil “Robert” Reed. He became a beloved husband, father, grandfather, and great-grandfather. He is survived by his wife of 35 years, Beverly Reed. He had two children, Tara and Paul, with his previous wife Judy Reed. Paul married Keri Rustand-Reed, wife of 29 years, and they had two children; Kyler Reed and Kaylie Reed. Tara is partnered by Dan Smith, and he called Joe “Dad.” Joe had three step-children, Rick Flescher (wife Karen), Rhonda Kriz, and Rusty Flescher by whom he had five grandchildren; Kelsey King, Austin Kriz, Dylan Kriz, Trenton Kriz, and Maisey Brooks. He lastly is survived by six great grandchildren; Kelsey’s daughters Lola, Piper, and twins Ophelia and Tallulah; and Austin’s sons Will and Mac.  Joe was very proud of his children, grandchildren, and great-grandchildren.