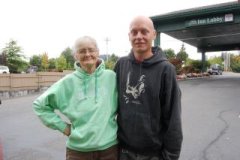 Born:
Monday, November 2, 1936
Died:
Saturday, March 31, 2012
Birthplace:
Vancouver, WA
Service Information:
Friday, April 6th, 2012 1:30 PM at Lummi Seventh-day Adventist Church, 2726 Cagey Road, Bellingham, Washington.
Corienne Maire Hay neé Hackett, beloved sister, mother, aunt, and grammy was born in Vancouver, Washington and died peacefully in her Bellingham, Washington home at the age of 75. She was preceded in death by her mother, Opal Adele Jones; her father, Russell Hackett; two sons, Steven and Wayne Montgomery; granddaughter, Alina Montgomery; granddaughter-in-law Anne Montgomery; and nephew Brian Waldo. She leaves behind sisters Dorothy O’Brien, Carolee Lindquist and her husband Bruce, Kay Waldo and her husband Ron; daughter Debbonnaire Kovacs and her children Nathaniel, Robin and Sally Christopher; son Levi Montgomery, his wife Cathy, and their children Brandon, Aaron, Amanda, Lacey, Steven and Andrew; daughter Cherie Valeithian, her partner Kristine Thomas, and Cherie’s daughter Heather Pauley; daughter Summer Katheryne Holmes and her children Lindsey and her husband Chris Leimbach, Liandra, Elliott, Spencer, Abigail, Preston and Valerie; and Wayne’s daughter Desiree. Also surviving her are eight nieces, two nephews, and numerous friends. Corienne became a Seventh-Day Adventist at the age of ten and was an active part of many congregations throughout her life. In recent years she was a member and beloved elder of the Lummi Seventh-Day Adventist Church. She was a full-time homemaker and mother while her children were young, and then worked as an Activities Director and Social Service Representative at area nursing homes for more than 20 years. Upon leaving her position in Social Services at Pioneer Ridge Health Care in the late 1990s, she became a private home health aide. She retired from that profession in 2010. Corienne was passionate about her relationship with God, a dedicated elder in her church community, a regular donor to Adventist Development and Relief Agency and other charitable organizations, an environmental conservationist, and a strong believer in “reduce, reuse, recycle” decades before that phrase was popularized. She was a compassionate woman who accepted just about everybody, foibles and all. As a result she “adopted” or was adopted by the friends of her children, the children of her friends, and others who needed a mommy, a grammy, a sister, or a friend to give a helping hand, a listening ear, or a hug. She also had a fiercely independent spirit and lived for thirty years on her own land without many of the conveniences of modern life. She could (and did) build, re-build, or re-purpose items for her daily life, cut her own firewood, can fruits and vegetables over an open fire-pit and carry drinking water from town. She was a talented seamstress who made beautiful clothing out of pieces of used clothing from a thrift shop or scraps and remnants of new fabric, often without benefit of a pre-printed pattern. She made wedding dresses and other formal gowns for various sisters, daughters and others, sometimes using curtains or bed sheets as fabric if that was all that was available. She was a writer of prose and poetry, a singer and songwriter with hundreds of songs and a CD to her credit, and was skilled in many crafts, including crochet, embroidery, quilting, making and arranging silk flowers, building bird houses out of natural materials, and making jewelry. She was famous for her ability to make roses out of anything handed to her, including ribbons, leaves, bread or pie crust dough, pieces of fabric, children’s modeling clay, and yes, even facial tissue or toilet paper. She was also an avid reader and lifelong learner who excelled at word puzzles and jigsaw puzzles. All of her skills and talents combined with her stubbornly-held independence made it difficult for those of us who loved her to take care of her, though she softened on that in the last few years. Her time on this earth was too short. We expected to have her with us for many more years, and we will miss her terribly. However, as long as we carry a piece of her in our hearts she is with us still. Donations can be made in her name to her favorite charity, the Adventist Development and Relief Agency www.adra.org ~ Biography by Cherie M. Valeithian, Corienne’s middle daughter
You’ll Never Walk Alone When you walk through a storm  Keep your chin up high  And don't be afraid of the dark.  At the end of the storm Is a golden sky  And the sweet silver song of a lark.   Walk on through the wind,  Walk on through the rain,  Tho' your dreams be tossed and blown. Walk on, walk on  With hope in your heart  And you'll never walk alone,  You'll never walk alone.
© 1945 Richard Rodgers and Oscar Hammerstein II

Corienne was a true original, a one-of-a-kind woman who lived her beliefs without imposing them on others. I will miss her greatly.

A donation in Corienne's name to Lummi Seventh-Day Adventist Church, to adra.org as listed above, or to a charity of your choice would be an appropriate remembrance.

Howdy! I know this is kinda off topic but I'd figured I'd ask.
Would you be interested in exchanging links or maybe guest writing a blog article or vice-versa?

My website addresses a lot of thee same topics as yours and I think we could greatly benefit from each other.
If you might be interested feel free to send me an email.
I look forward to hearing from you! Terrific blog
by the way!