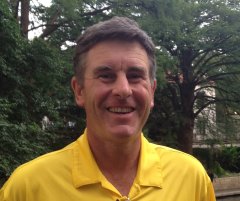 Curtis John Kramme was born May 29, 1961 in Temple, TX to John and Gayla Kramme. By the time he was one, the family had moved to Blaine, WA. He spent his first few school years living half the year in Blaine and the other half in the Tri-Cities as his dad moved back and forth between jobs. During his youth, he loved to be outside with his brothers, Bert and Pat, as well as many of his friends exploring California Creek and the woods around Doran Riding Stables, the family operation on Loomis Trail Road. He spent many hours working at the stables taking care of horses, and cleaning the stalls. For many years he and his horse, Matt, participated in youth rodeo and 4-H horse shows. All those years working at the stables taught him the meaning of hard work, but also led him to trade in his horse for a car when he was old enough to drive. In junior high and high school, Curt played football, basketball, baseball, wrestled and ran track. One of his proudest accomplishments was when he was a freshman in high school, he high jumped 5 feet when he was only 4 foot 11. His senior year in 1978, Curt was the quarterback and safety for the team that won the one and only football championship for Blaine High School.

After graduating high school, Curt worked at a rope factory in Ferndale, and it only took one day of work for him to realize that he would rather further his education at Western Washington University. To pay his way through school, he spent his summers working in Alaska, either in a cannery or on a fishing boat. Curt decided he wanted to study to become a teacher because he thought it would help him overcome a stuttering problem. During this time, Curt also started his coaching career at his alma mater, Blaine High School, as an assistant coach. It was while attending Western Washington University, that Curt met his wife Wendy. She knew what she was getting herself into when on their first date, he took her scouting at a football game. Upon graduation, Curt and Wendy ventured to Bakersfield, CA for his first teaching job. Three years later they returned to Burlington, WA for Curt to teach and coach girls’ basketball, football, and golf. Ironically, the die-hard Blaine Borderite made the decision to start his head coaching career in Lynden, his arch-rival while at Blaine.

His years at Lynden led him to many successes, including seven state championships and numerous awards, most recently his induction to the Washington State Football Coaches Association Hall of Fame. While in Lynden Curt and Wendy raised their three daughters, Alayna, Zoe, and Maddie. He was extremely proud of his daughters and all of their accomplishments.  As a family they took many vacations, one of his favorite destinations being Disneyland. Aside from football, Curt spent a lot of his free time involved in other sports around the community. He spent many hours coaching baseball and girls golf, as well as refereeing basketball. Curt started reffing basketball during his time in college, and continued to do so until this past year when he was unable to do.

Curt loved the game of golf, and was fortunate enough to have a lifetime membership at Shuksan Golf Course where he made many friends and loved the wildlife and scenery. He also had a love for classic rock, classic TV shows like Gilligan’s Island, and classic comedy movies such as Caddyshack. He could famously quote any line from Jim Carey’s the Grinch, thanks to many nights up with his daughter Maddie. In 2015, Curt finally got the son he always wanted when Alayna married Michael Haynie and the two blessed him with a beautiful grandson, Grayson. Over the last year of his life he fought a hard battle, and whenever he was feeling his lowest, he would Facetime his favorite grandson, Grayson and it would always cheer him up. On April 22, Curt lost his battle to cancer and though he may be gone from this Earth, his spirit and memories will be with us forever.

My thoughts and prayers are with wendy and your 3 kids! He was a the best coach i have ever work for as a manger. I wish you guys the best during this difficult time!