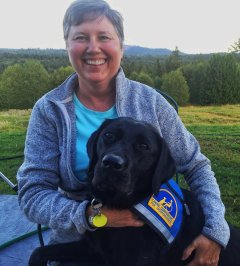 Born:
Sunday, November 2, 1958
Died:
Saturday, February 22, 2020
Birthplace:
Casper, WY
Service Information:
Due to unforeseen circumstances, the celebration of life scheduled for April 25th will have to be postponed to a later date. The new date and time will be posted here when available.

Danene Loree Park passed away in the early afternoon of February 22nd, 2020, after a brief and unexpected illness. She was born and raised in Casper, Wyoming, and subsequently lived in Utah, Colorado and Alaska before settling in Bellingham, Washington, where she lived for almost 30 years. Danene was a beloved occupational therapist for the Bellingham Public Schools, often bringing her service dog, Mia, to engage and support her students. During the almost 3 decades she worked for the district, Danene spent time with students in many different schools and tirelessly advocated for greater services for children with disabilities. She also served on the district’s Mobile Response Team. She was highly politically active, writing letters to representatives and attending protest marches in Bellingham and Seattle. She loved painting rocks to leave in Bellingham parks, going to movies, watching shows with her kids, visiting the San Juan Islands, and taking trips to London. She was a devoted mother, daughter, sister and friend. Danene is survived by her children, Brenna (Deep) and Kiernan Park-Egan, her brothers, Dave (Harper), Dwain (Dianne), and Tony (Kim) Park, her mother Evelyn Park, and her dog Mia. She is greatly missed by all who knew and loved her.