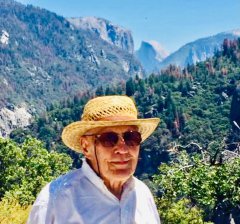 Dan Stahly 92, peacefully passed away July 30, 2021. Dan was born to Daniel and Anna (Kielbasa) Stahly on October 21, 1921 in Chicago, Illinois.
Dan was a dedicated father of three children Daniel Robert Stahly (D 1989), Thomas Timothy Stahly, and Julia Melinda Stahly.
Dan’s children meant the world to him. During his divorce in the 70’s, he fought for custody of them, before it was acceptable for men to have sole care. He was a groundbreaking individual, a caring and supportive dad. His home reflected his love for family, displaying family photos and artwork of his children.
Dan was an accomplished mechanical engineer, with 16 US patents for his designs. He worked with Motorola, Sunbeam and Eaton Corporation in research and development.
After retirement he moved to Bellingham, Washington to pursue his active lifestyle and love of outdoors. Not only did Dan take up sea kayaking and snow shoeing but he continued to jog, hike, backpack, ski downhill and cross-country, and do yoga.
In the 1970’s Dan took up running. He participated in many weekend 5 k, 10 k weekend races, and a couple marathons, often winning best time in his age group. He proudly displayed his many metals on the wall of his study. He continued to run into his 80’s. In addition to his passion for the outdoors, after retirement, he volunteered at the Western Washington University Engineering Department, Vehicle Research Institute, with Dr. Michael Seal and Professor Eric Leonhardt.  Dan shared his real-world engineering knowledge with the college students.  In turn, the students kept him young at heart.
Dan loved to travel and explore the world. He traveled to India, Nepal, China, Canada, England, France, Switzerland, the Netherlands, Germany and many of the US National Parks.  On Sundays Dan could be found in his MG cruising down Chuckanut Drive, hugging the curves of the road.
Dan is preceded in death by his parents, sister Ruth Ahlgren, and son Dan.  He is survived by his son Tom and daughter Julie.
At Dan’s request no services are planned. Instead, his family encourages you to pour your favorite micro-brew and toast to a life well lived.
Many thanks to the team at Whatcom Hospice, Hospice House, and Circle of Life for their loving care during Dan’s battle with prostate cancer.  In lieu of flowers please consider donating to Whatcom Hospice in Dan’s memory https://whatcomhospice.org/honor-a-loved-one/
Arrangements by Whatcom Cremation and Funeral.

Sounds like he lived an incredible life. Family, travel, and experiences. Blessed

Dan, I'm so glad I was able to interact with you here in New Orleans a few times. Toasting to you!

Rest those hardworking hands and enjoy the best part of lefe. Resting internally, It was nice meeting you. Beautiful souls are never forgotten. Your daughter spoke highly of you and loved you dearly. God bless your soul. Father God bless Ms. Julie heart, give her strength and understanding to endure this life changing moment. XOXO