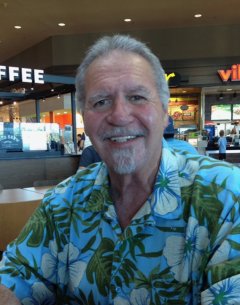 He will be greatly missed. I can't say enough about the wonderful person, family man and nephew he was. Always looked forward to seeing him and chatting. All our love. Rest in Peace.

Steve and I are very sorry to hear this sad news.  Memories of your dad at Storm Football games cheering you both on are plentiful.  Always a smile, friendly greeting and fantastic sportsmanship.  He will be missed.  Our thoughts and prayers are with you all during this difficult time.

Dave was such a lovely man.  So friendly and warm.  An amazing soul, as evidenced by the wonderful legacy of his family that he raised so well, with his loving and devoted wife, Debbie.  May his monumental love for all of you, and the many, many memories of fun, family and friends that he left for you, bring you some comfort, during these most difficult of days.
My heart is with all of you.  Debbie, much love and a great big hug to you, Sweetheart.
May his gentle soul Rest In Peace.

Rest in peace Dave. He will be greatly missed. We can't say enough about what a wonderful person, family man and nephew that you are. We always looked forward to seeing you and chatting. All our love and prayers

I did not know him, I have the pleasure of knowing his sons. I am sorry for your loss, I know he will be missed.

We knew this day would come, but are so grateful for all the years we were given. We're not sure where and how our sense of humor dovetailed - but at least half the most genuine laughs we've had in our lives were with Dave. We saw things so much the same way he did. So sorry for Deb and kids/grandkids - but again, so grateful he had all of you to love on him. You have been and will continue to be a great family. Even though we didn't see as much of each other as we should have these last few years - we never drifted away in our hearts. We could always pick up right where we left off. All our best to the Potes'.

We were all so sorry to hear about the loss of Dave. We have such great memories of him and we so enjoyed having you all for our neighbors and friends. You are such a strong and loving family and we know that will help you get through this difficult time . With love , Dale, Ruth and Nadine and Nicole

I was fortunate enough to be included on a few of the Potes family vacations to Sea Side, OR growing up. Getting to experience first hand the generosity of Dave and Debbie is something I'll always cherish. The commitment to putting your family first is a core value that Dave lived by and I will forever be inspired by his legacy.

I met Dave through musicback in the 1970's and shared the stage with home for over 30 years with many band configurations. There has never been a kinder soul pass through my life, Dave remains in my memory as a happy soul always smiling and upbeat. A bgifred guitar player, his band mates in Shiloh dubbed him "Super Dave" one night on stage and it stuck...for a long time...

Those of us on the outer orbit of Dave's life will miss him dearly and our thoughts are with Debbie,the kids and family whom will feel the pain do loss more than we.  We are all more rich for having known the man.

It was a sad day when Dave had to stop playing live performances, overshadowed only by his passing. Today I like to think of him waiting for

his family and friends

you know Dave is waiting

with patience grounded in grace

gleam in his eye, guitar by his side

Jesse and Lucas.... (the Potez Bros as Max would say) We are so sorry to hear about this. Big hugs to both of you - give your Momma one from me too please.

Sincerest condolences to Dave's friends and loved ones. I just gave a Fender Deluxe reissue amplifier to my eldest child. I bought it from Dave back probably around 2000. Dave was a real nice fellow. May he rest in eternal peace and frequent all heavenly jam sessions!