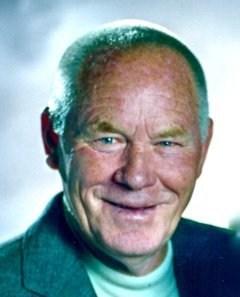 Donald Paul Nielsen went to be with his Savior. Don was born 26 Jan 1931 to Viggo and Harriet (Willemsen) Nielsen in Los Angeles CA. He died Monday, 05 Dec 2011 at his Whatcom County Everson home surrounded by loved ones. Don came to Whatcom County in 1943 with his family where they had a farm in the South Pass area. He graduated from the old Nooksack Grade School and from Nooksack Valley High School in 1951. Don was active in Future Farmer's of America, choir, and Pep Club where he enjoyed being a Cheer King for the Pioneers. He also served in the Air Force National Guard Reserves in 1949-1950.

On 18 Nov 1950 Don married Shirley Yvonne Fuller, his childhood sweetheart and the love of his life. They lived in Glendale CA before returning to the Everson and Sumas area in 1953. The family developed a dairy farm of registered and grade, high producing, Holsteins. In 1973 they developed another farm in the Lawrence area, raising Simmental and Red Angus beef cattle before raising row crops.

Don loved his Lord, his family and the land. He was very happy caring for his surroundings. Every day was a gift he was grateful for and his word was his bond. He was very passionate about some things and always enjoyed a good debate! The past two years he was deeply involved in grandson Daniel's basketball games, traveling to Grandview WA many times. He was affectionately known as 'Grandpa Greyhound' and was a proud member of the Grandview Greyhound Basketball Fraternity.

Preceding Don were his grandparents, his parents, his in-laws Joseph and Frieda Mathes Fuller, brother-in-law Jerald E Fuller, plus aunts, uncles and cousins.

Also surviving is Darrel VanWeerdhuizen (Betsy) of Everson WA and their sons, Travis, Grant Donald and Chase. Don has been 'Poppa Don' to them forever.

There will not be any service at Don's request. A private family gathering will be held at a later date to celebrate his life. In lieu of flowers, please send memorials to Sumas Advent Christian Church PO Box 10 c/o Clothesline Ministry Sumas WA 98295 or to Hospice Community Program 2800 Douglas Ave Bellingham WA 98225 or to your favorite charity.

I will greatly miss you papa! every time i went over there even though my parents divorced when i was young.. he always asked about my mom and how she was doing and every time i left he said, " sweet girl, be sure to tell your mama i love her and give her a hug and kiss for me!.. love you sweet girl!"...and that is something i will always remember about him.. he also always wanted to know how i was doing in cheer and i always told him and showed him a video or just showed him myself..and he was always blown away with the kind of stuff we did..another thing that will stick with me for forever!.. papa always had a positive outlook on things it seemed like even when they were at the worst possible..i love you papa!.. something i look up to and want to strive to be.. also being married for 61 years to my wonderful grandma GiGi and being super strong in the Lord is another thing i look up to and hope that is what God has in store for me..(: i know you are paving the way for the rest of us in heaven!! and i know you are looking down on us smiling and waiting!

love you for forever! <3

There were ups and downs, my love, but we persevered and made it til death did us part thank you for being such a sweetie to your family. Thank you for being such a hard worker for us. 06 June 2004 God allowed an auto accident in our own front yard to give you a Christopher Reeves break and really got your attention. You often wondered why it took you so long to see the Light! the next 7.5 Years brought many more health problems but you never did complain. It truly was an honor to care for you and see you grow in your faith. We shall be together again one of these days. My love, Shirley

Harriet,
Just wanted you to know that one of your former students, sends his prayers and condolence to you. Know that you are in the Lord's hands, and nothing in all of God's creation can separate you from His love and care.