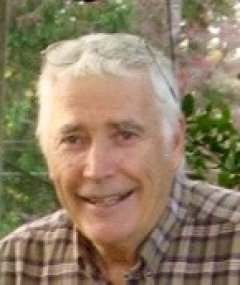 Don was born January 12, 1935 in Ames, Iowa to Melvin G. Holmes and Irene Stewart Holmes. Raised in Bellevue, Nebraska he attended Wheaton College in Chicago, Illinois and Young Life Institute in Colorado Springs, Colorado.  There he met Barbara Jean Lind of Bellingham, Washington and married her in Bellingham in November of 1959.  The two served together as Young Life staff in Kansas City, Missouri where their first daughter Christy was born in 1960.  Young Life work then took them to Colorado Springs, Colorado where their daughter Suzanne was born in 1963.  In 1965 Don and Barbara moved into her childhood home in Bellingham, Washington and their son Timothy was born in 1967. Don managed the Mount Baker Ski Area from 1965 to 1969 and the Lind Gravel/Pacific Concrete interests from 1969 to 1972, at which point Don and Barbara opened The Quest Bookstore in downtown Bellingham, to serve the Christian and Seeking Community.  This led to a wholesale book warehouse and export agency, Baggins Books, from which Don eventually retired. Don loved to read and discuss ideas, with a particular fondness for the writings of C.S. Lewis, from whom Don once received a letter.   He and Barbara also enjoyed travel, visiting Europe, Russia, Israel, China, and Turkey, before Don’s life was dramatically altered in 2006 by an unfortunate tangle of tree, chainsaw, wind, and gravity.  He spent the last 14 years of his life as a paraplegic in either his wheelchair or his bed which was a huge frustration for he could no longer help his family, but was instead dependent on them to help him.  These years were blessed by his care-giver Aaron Brandt, who — in Don’s words — “made what was almost an intolerable situation very pleasant”.    At 85, Don died at home in the early morning of Monday, March 2, 2020 holding the hand of a family member.  His passing was as gentle and peaceful as we could hope for and we know he is walking with his Lord in his life ever-lasting. He is preceded in death by both his parents and is survived by his wife, Barbara Jean Lind Holmes, and his children: Christy Lind Hart, Suzanne Kay Chandler, and Dwight Timothy Holmes; grand-children Kara Maguire, Kelli Sittser, Kayti Christianson, Andrew Chandler, and Juliana Chandler; great-grandsons: Charlie Sittser, Danny Maguire, and Henri Sittser.  He is also survived by his sisters, Margaret Buswell and Carol Butte of Nebraska, his brother Bob Holmes of Bellingham, and numerous fine nieces and nephews. Don asked that any memorial gifts be directed to www.IJM.org.  Memorial gathering pending COVID-19 abatement.