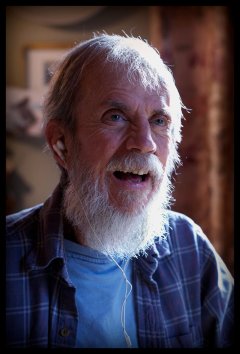 Mike Mikkelsen died peacefully at home in Bellingham on February 14, surrounded by his family.

Mike was born June 14, 1933 in Chicago, Illinois to parents Ebba Berg Mikkelsen and Asger Mikkelsen. In the 40’s, his parents bought the Circle Bar Lazy T ranch in Lewistown, Montana, where Mike began to shape his destiny. He owned his first car, a 1927 Model-T, when he was nine years old. From then on cars with a “personality” were his passion. He restored “rolling sculptures” for most of his life. Mike attended Fergus County High School in Lewistown, Montana, class of 1951. After his undergraduate studies at Colorado A&M and an MA from Montana State University, with Frances Senska, he completed his MFA in ceramics at the University of Minnesota with Warren McKenzie. Mike created his art and taught in California, Montana, Minnesota, Kino Bay, Mexico and Bellingham,Washington.

Mike hosted Alden’s Party Line, a 50’s radio talk show, at KXLO in Lewistown. In the 60’s he owned Grain Bin Pottery in Maple Grove, Minnesota and Checkered Flag, a European car dealership in Osseo, Minnesota. In 1982 he started a new business, Prairie Auto and Manifold Restoration in Northfield, Minnesota.

An extraordinary artist of clay, metal, paint, life and love, Mike taught us the glory of aesthetics and how to live courageously as fully-human beings. Perseverance and tender compassion for his fellow People with Parkinson’s were evident in his tireless efforts to raise awareness and money for Parkinson’s research and quality of life with his garden sculptures, Yellow Birds for Parkinson’s.

In 2010 Mike said: “I’ve had a rich and grand life. I have no regrets. Although I sometimes felt like a windup toy without a key, I’m thankful for the generosity of people and the years that gave me time to continue my art and educate others about Parkinson’s”.

A memorial service and celebration honoring the life of Mike Mikkelsen is planned for early summer.

Donations can be made to Whatcom Hospice (or your local Hospice) or Northwest Parkinson’s Foundation www.nwpf.org

View the song "Stand By Me" playing on Mike's headphones in the photo above: http://www.youtube.com/watch?v=Us-TVg40ExM

I sure love you pop.

Peace, old friend. I will always cherish the memories of the good times and great adventures we shared. Save a place on the other side for me.
Skippy

While listening to the song I got a beautiful image of you dancing with no trouble at all. Now we get to have you standing by us all the time, no matter where we are in this world. Love you always, Grandpa.

So beautiful..the words,music and picture of Mike. God surround you Anne with Love. God Bless you and your sweet family. Love, Aryon and Wayne

So many good memories,so many good times, I will cherish them for the rest of my life. Rest in peace, Mikkelsen.

So many good memories,so many good times, I will cherish them for the rest of my life. Rest in peace, Mikkelsen.

We will be forever grateful to have known you and to count you as brother, friend and inspiration. You will always live on Mike.

What a great bio for a great guy. Thanks, Mike, for the wonderful son that we had. We both love you and treasure all your gifts to us.

What to say. My marvelous brother and I have known each other longer than anyone else in the world. . . A big vacancy with your passing, but we are
grateful for the legacy of family, art and memories left for us all. . .

And to the rest of our family, kids, grandkids, great grandkids, but especially to Anne: we share the pain of loss and are grateful to you for your
love and support. Anne, you truly set the example of what it means to stick by "for better or for worse," through thick and thin, "in sickness
and in health!" Your love and devotion to Mike touched us all. His life truly was enriched and extended by you, as through highs and lows your
love for each other endured and grew! Thank you.

Thanks for sharing your wonderful life with us. I will have the fondest of memories of you with me forever:-)

I love this picture Mike! Always keeping things positive, you look like a little kiddo full of excitement and life, appreciating one special moment! We are missing you like 'crazy cakes' at our house! Love you!

Thank you, Jammin', for all you taught us and for the unconditional love you showed all of us. I always looked forward to having a peanut butter cookie and cup of tea with you when you'd stop by. You were my favorite cookie customer :) We love you and miss you dearly!
Love,
Andy, Jules, Charla Anne, Teddy and Aidan

C.S. Lewis's quote, "There are no ordinary people," certainly pertains to you, Mike. I am truly fortunate to have known you in Northfield, and revel in the good times, whether working on the sculpture competition, the Arts Guild, or just enjoying your's and Anne's wonderful ambience indoors and out. Fabulous pictures for a fabulous life. I have thought of you often and will always do that. You rocked in life and you rock in memory. Love, Jill

We are now in 2020 and Mike has been gone for over seven years, but he is still very much present in my mind. When I find myself in a bind with some problem and feel tempted to give up, I still hear Mike's words of ecouragement and after succeeding, his question: "Who got it?" Percy!! [perseverance]. He was a one-of-a-kind man and the best friend anyone could ask for.