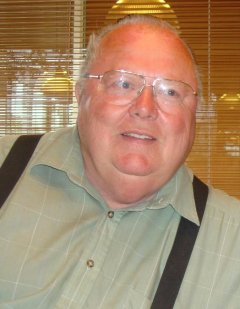 Edward M. Sanger "Eddie to some", age 81, of Bellingham, WA, passed away peacefully at his home.

Ed was born in Seattle, King County, WA to Edward T. Sanger and Lucile (Lumbert) Sanger, on August 4, 1938. He graduated from Anacortes High School. He was married to Peggy (Houser) Sanger for 59 years. He worked in the grocery industry starting at Albertsons, and later was co-owner of Holiday Foods. He ended his career in the printing business.

He enjoyed trips with his wife Peggy. They would go on cruises, travelling to Hawaii, taking road trips to Palm Springs, but wherever they went they made new friends from all over the world. They would stay in contact and would then plan trips to their houses, or their friends would travel to the U.S. where they become special parts of our family. Ed enjoyed playing Santa for his grandkids and great grandkids every Christmas; a tradition passed down from his dad. He enjoyed taking his kids and grandkids on trips to the ocean, limo rides to the circus, dinners and he was a great leader of his “All Stars”. Every year at our reunion weekend he had many instruments to choose from and play lists to play along and sing, as he encouraged all young and old that participated to do their best and be All Stars. He would hand out ribbons and awards to all.

Ed was preceded in death by his parents; Edward T. Sanger and Lucile Lumbert Sanger and his sister Carol Sanger Fountain.

A beautiful tale of Ed's Life.  Today would have been his 82nd birthday & we all miss him very much.  Thank you Karen for putting this together.

Happy Birthday! I miss Ed very much. Thank you for the lovely words, Peggy and Karen.

Ed gave so much to be remembered. May you hold those memories near and dear to your heart always.. His legacy will live on thru all of you! God bless you all!

Grandpa, I miss you very much. You’ve always been an inspiration in my life to do better! I will always remember all stars, the opera, the nutcracker, the many trips I got to go on with you and Grandma but especially Seattle. That was our special place. First the carousel, dinner at the Sheridan hotel and then the horse and carriage ride around the city! You have shaped my life in many ways and I feel beyond blessed to have had you in my life.   Rest In Peace Grandpa! I love you to the Moon and back!

Happy birthday Grandpa, you will be forever in my heart and missed greatly.

Dear Peggy, Pam, Karen and Tom.  We will really miss Ed.  We loved him like family and always enjoyed visits with him and Peggy and all of you,  Ed was a true believer in shared experiences and he went out of his way to make them happen.  He always took an interest in everything we were doing and always made us laugh.  Happy Birthday Ed -- we love you and will never forget you.

Ed was a good neighbor and friend for many years. He was always optomistic and happy. When Ed would enter the room things became brighter and more joyful. He was an enthusiastic bridge player and husky fan. The world needs more men like Ed. I am sure that the next generations of Sangers will miss their father, grandfather, and great grandfather but will carry on his spirit.

You were dearly loved and will be dearly missed. Thank you so much for you love, caring, generosity, support and humor.  Every memory of time spent with you and Peggy brings a smile.

In the 50 years I have known Ed, he always made me feel like like we were the best of friends. Peggy is my Cousin & when I first met Ed, it was impossible to not love that man. He was the richest man I knew because the love he spread around. Peggy, we love you. I will donate $50 to Joe Biden in his name.

He will thank you from his heart.  He dearly wanted to live until November 4th but just could not pull it off!!  Thank You for the kind words.

What a blessing it is to have known Ed. My deepest condolences to you Peggy, Karen, Ken, Justin and the rest of the family. I will miss my American Dad....so many happy memories of being together with all of you in Palm Springs, Bellingham and Saskatoon. Sending love to you all.❤️

What a good friend and neighbor Ed was.  We will miss seeing him on his deck in the afternoons and discussing "what was for dinner."  Love to you all.

So sorry to hear of Ed's passing. I always enjoyed seeing the two of you in Palm Springs.

Grandpa, may you now Rest In Peace. I will forever treasure our memories: homemade popcorn, allstars, our love for Barney, flying airplanes in the parking lot, your part in the happy birthday songs, dressing as Santa for all of my childhood, visiting you and grandma just a couple weeks ago for the 4th of July was just what we needed. You will be forever missed. I love you.

My love to Peggy and family  I'll be missing you but remembering all our good times in Palm Springs!!

Ed will be missed by everyone who was lucky enough to call him their friend. I will always remember his love of technology, especailly the technology that most of us did away with when we finally upgraded WinXP.  (....@ecxite.ocm lol) and how he loathed Apple Music for deleting his downloaded CD's. I am glad I got to see him in good spirits right till he left us and moved to his lake cabin in the clouds. I feel like he will always be nearby watching over the ones he loved, and live on the hearts of those who loved him. I am here if you need anything Peggy dont hesitate to call. Thank you both for inviting me into your home and for being my clients and my friends.