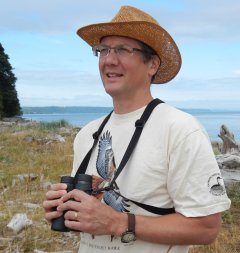 Edward Whitefield Swan II was born on Nov. 15, 1962, in Olympia, Washington, to Shirley (Van Buskirk) Swan and Edward Swan. Ed was a loving husband, devoted father, respected brother, and beloved son. Among those who knew him, he was recognized as a birding savant, sharing his extensive expertise of birds with ardent enthusiasm.

Ed’s knowledge of birds was legendary, yet his manner was modest and humble. He learned birdwatching from his grandmother in rural Grays Harbor County, and he developed spotting techniques while hunting in the Olympic Mountains with his dad. As a master birder, Ed organized dozens of Christmas Bird Counts in multiple counties; conducted scientific surveys to document changes in the diversity and abundance of birds; and greatly contributed to community science in Washington state and beyond. His lineage included James G. Swan, resident and ethnographer of the Makah Indian Nation.

Ed was meticulous in his record-keeping, noting the arrival and departure dates for migratory and rare birds wherever he lived. This effort culminated in his essential book, The Birds of Vashon Island: A Natural History of Habitat and Population Transformation. Ed was a cornerstone of the avian community known for his birding-by-ear skills, understanding of critical bird habitats, and curating regional historical bird-sighting records dating back more than 100 years. He resurrected Washington Birds, the journal of the Washington Ornithological Society, incorporating peer-reviewed content from regional experts. He provided online classes for birdwatching enthusiasts seeking to learn the systematic methods that he had refined over a lifetime. Ed graduated from Capital High School in Olympia and obtained his B.A. in Political Science with Honors from Whitman College. He held many professional roles including community organizer, editor, and research coordinator. As an Eagle Scout, he modeled stewardship to his sons, demonstrating compassion, dedication, and resiliency in tough times. Ed regularly volunteered and advocated for the underrepresented, including the housing-insecure, disadvantaged youth, and others facing social inequities or injustice. For the past 10 years, his family was instrumental in advancing the Vashon Primary School in Ntinda, Uganda, enabling comprehensive education for aspiring youth. He traveled the world with his wife, Linda, reveling in adding bird sightings from five continents to his lengthy life list.

Ed passed away suddenly and unexpectedly at the age of 59, on Oct. 28, 2022, despite heroic efforts by emergency responders. He is survived by his wife, Linda Barnes; his mother, Shirley Swan; his sons, Garnet and Leander Swan; and his sister, Caryn Swan-Jamero. He is predeceased by his father, Edward Swan, and his sister, Cynthia (Swan) Abbott.

In lieu of flowers, the family requests that donations be directed to the Land Trust Bird Conservation Initiative in memory of Ed Swan at www.birds.cornell.edu/tribute, or to your local Audubon chapter.

“There are some who bring a light so great to the world that even after they have gone, the light remains.”

We are so sorry to hear of your loss. Our thoughts and prayers are with you  during this time.

We were saddened to hear of the loss of Ed. While we never met, it's clear he was a passionate and truly good human being watching out for those he loved and those we share the earth with. May your memories bring you peace and strength.

I am sorry for of your loss and you're in my thoughts.

Dear Linda, My heart grieves for you and the boys.  I cannot imagine what you all are going through.  Please know that I am thinking of and praying for you all during this difficult time.