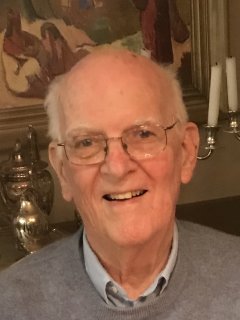 "WooHoo! I made it to 92!" Gary Lewis celebrated his 92nd birthday surrounded by his loving family. He was born in Seattle to Nedra (Wall) and Arthur Lewis on October 29th, 1929. He died November 18th, 2021. Gary kept his sense of humor and can-do attitude to the very end.
(Frederic) Gary Lewis grew up in Seattle’s Mount Baker neighborhood. As a youth, he watched the construction of the I-90 floating bridge. He loved to tell the story of being the first person to ride a bike across the bridge when it opened. His education started in a one-room schoolhouse and continued onto John Muir Elementary, then Franklin High School. He graduated from Lakeside School in 1947.
An excellent all-round athlete, Gary played football and basketball at Colorado College in Colorado Springs. It was there that he met the love of his life, Jeannette Elliott. After graduating, Jeannette became a United Airlines stewardess, Gary joined the Marines. He was assigned to Korea, but instead was called to play football for the USMC. Gary & Jeannette were married in Chicago in 1951. They moved to Kingston, Ontario, Canada, where Gary attended medical school at Queen’s University. As captain of the football team, Gary led the Gaels to championship victory. He was inducted into the Queen’s Football Hall of Fame in 1982. In Ontario, Gary also had the honor of serving as a Guardsman at Old Fort Henry.
Moving back to the states in 1959, Gary continued his education at King County Hospital, Seattle; Lahey Clinic, Boston; and the University of Minnesota, St. Paul. Returning to the Seattle area, Gary joined his father’s practice where he became a universally respected and well-loved colon & rectal surgeon. He was the Chief of Surgery at Swedish Hospital and President of the Seattle Surgical Society.
With five children in tow, Jeannette & Gary settled on Mercer Island. There they formed life-long friendships with their neighbors, bridge and gourmet groups. Some of their fondest memories are from annual trips to Rockaway Beach, Oregon, with the Greenan family.
Aside from family, friends, and patients, Gary loved to play golf. He experienced the joy of hitting not one, but three holes-in-one. Over the years he was a member of Sahalee and Broadmoor golf clubs. In retirement, Jeannette & Gary lived in West Seattle and then Kirkland. They enjoyed their many friends at Desert Island and Desert Braemar in Rancho Mirage, CA, where they spent the winter months.
When Jeannette died, Gary returned to Mercer Island where he enjoyed his bridge groups and his dear friend Shyval (Maria) Dodds. He cherished visits from his children, grandchildren, and sister.
Gary is survived by his sister Mary Lewis Grubbs; his children Chris, Izzie (Tim), Jennifer, Steve (Cynthia), and Carol; his grandchildren Brittany (Oskar), Olivia (Matt), Izzabella, Kieran, Henry, Vincent, and Ci; his great-granddaughter Evy. He was preceded in death by his wife of sixty-two years Jeannette; his parents Arthur and Nedra; his brother Arthur.

Love you and miss you, Pop. Think about you every day.♥️