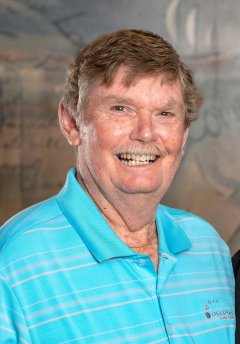 Garry Sager, 69, a Leo was born on August 19, 1950 and passed away on April 25, 2020 to the perfect golf course in the sky. He graduated from Bellingham High School in 1968, but attended Sehome High School the year before.

He spent 15 years in Santa Monica while his dad, Frank Sager, worked as a plasterer and a commercial fisherman and his mom, Helen Hanger Sager worked at a college and as an egg candler. Garry started his career in retail at 15, by working in 2 liquor stores stocking shelves and bringing lunch to one of the owners. He also sold newspaper subscriptions to earn tickets to go to Disneyland. He was quite the salesman! His days in California were spent going to school, working, at the beach, skateboarding, riding bikes and touring Disneyland and Knotts Berry Farm.

After moving back to Washington, he held a variety of jobs. One dear to his heart was helping his Aunt Louise and Uncle Ken Sager on their Olson Road farm. Others included construction, commercial fishing in Alaska, retail and attending Skagit Valley College in Mt. Vernon to study Park Management. Garry worked as a gardener at Peace Arch Park and expected to become a park ranger. But when he found out the Park system was going to require the rangers to carry a firearm, he said no way. That was when he began his 37-year career at Safeway.

During the last year of high school, Garry met June (thank you Lisa). They married in September 1970. In 1974, they were blessed with a son, Erik. Erik and Garry raced tenth scale cars in the 80’s and won several trophies. They raced locally in Mt. Vernon, eastern Washington and British Columbia. They spent hours on the three wheelers going through the woods and in the mountains searching for mudholes and fun rough riding. The family went out in the 4X4 vehicle in the winter searching for the perfect Christmas tree and enjoyed a big bon fire and hot chocolate. Garry and June also went ice fishing in British Columbia in February/March, caught several trout, rode 4 wheelers on the ice in blizzards, then enjoyed a warm meal in the cabin afterwards.

Garry served 10 years as a volunteer fire fighter with Whatcom Co. Fire Fighters Association District 7, 20+ years with Whatcom County Search and Rescue/4X4’s and Whatcom Four Wheelers. There was lots of camping and hunting, ending with his favorite sport in later years golf.

Garry retired in 2012 and found a winter place in southern California, Desert Oasis Mobile Home Park, just outside of Desert Hot Springs. It was perfect and really close to many golf courses. Here he enjoyed eight years of golfing with other snowbirds, the blue skies, warm temperatures and spending time in the company of many new friends.

Garry loved his family, was so proud of his son and adored the time he spent with the grandchildren. He worked hard and played hard, he loved life. Garry felt so fortunate to have met so many wonderful and generous people in his life, both across the border in Canada and here in the lower 48. Garry is now at peace after struggling with many health issues, the latest being multiple myeloma, but a stroke took his life. A good friend of ours used to tell him “you are one tough SOB!”. And that was the truth!

In lieu of flowers, please make a donation to your favorite charity.

Sorry to hear about Gary. Wish you and your family all the best. Sounds like he had many good years and was well loved.

We are one of the many Canadian friends who had the good fortune to meet Garry during travels.   It was truly a pleasure to have Garry as a friend, a fellow Desert Oasis resident and golfing buddy.  He had a mean swing on the courses and we would often hear his famous laugh or that mighty cuss at a bad swing during our walks around the courses.  He loved his golfing and enjoyed  it even more with friends!

May he rest in peace in golfing heaven with a cold beer in one hand and a 3 wood in the other.   We shall truly miss him.

Garry is a great guy.  Not sure why the good die young.

it was a pleasure to have met u.  one day we will do another round

Garry enjoy the peace and serenity in heaven as it is in playing golf
Snowbirds from B.C.

Please accept our deepest condolences for your loss.  Our heart goes out to you and to everyone who knew and loved him.  We enjoyed Gary's company...he will be sorely missed.

We are so sorry to hear of Garry's passing. We are thankful to have shared many a happy hour filled with laughs and friendship in Desert Oasis RV Park. We will remember those times and hope that Garry will look down on us from his happy hour cloud in Heaven and keep an eye on all of us.

June, we hope that the support of family and friends will guide you through the difficult days ahead. Pease know that you are in our thoughts and prayers.

Gary was a good friend and our friendly park neighbour. We will miss him very much. He was always very kind and cheerful, even when he wasn't feeling his best. One of the finest, rest in peace Gary.

June we were so sad when we heard of Gary's Passing. He was a great guy and will be missed by all who knew him. Please take care of yourself the way we know he would want you to. You both will always have a place in our hearts. Marg & Ray

We had the pleasure of being one of Garry's many snowbird friends.  It was wonderful to have spent many hours on the golf course with him and then reminisce over happy hour. We will miss his quick smile and hardy laughter.

June, please accept our heartlfelt condolences. It was a pleasure to know Garry. He was a terrific friend who always had time for people, and would do anything to help you. We shared many a laugh at Saturday morning coffee in Desert Oasis RV Park. He will certainly be missed. RIP.                           Bob and Carrie

We are so sorry for the loss of Garry.  He was a great guy and always smiling and happy no matter his own troubles. We miss camping with Garry & June in Winthrop. Our hearts and prayers go to the family and we know Garry is on the fairway at the best golf course ever.

We were so very sorry to hear of Garry's passing.  We'll always remember him with that big smile on his face and that great sense of humor.  He could make a person laugh just by commenting on some of the everyday happenings around us.  Even though we haven't seen you all in awhile, we knew you guys were having fun as snow birds, and keeping busy when you were home.  We will always love you and your family, and consider it the world's loss that Garry is no longer with us.  Our thoughts and prayers are with you, and may God comfort you now and always.

Dear June and family. We were so sorry to hear of Garry's passing. He was a great guy who brought so much to your lives. Cherish the many wonderful memories you have of him. Thinking about you during theses difficult days.

We are sorry for your loss.  Our thoughts and prayers are with you.

June and family- I am so sorry for your loss of Garry. Hoping you find peace and love in your memories. He was great guy one of a kind.

June and family-'so sorry for your loss of Garry.He was a great father husband and grandpa and I wish your family peace and joy eventually.

So sorry to hear of Garry's passing.  Our thoughts are with you and the entire family.  Garry was a good friend and I remember our years together with Search and Rescue.