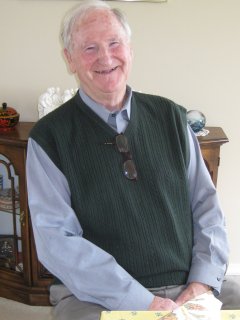 Gayle Dwayne Salmon passed away peacefully on May 26, 2022. He was 93 years old.
Gayle Salmon was born in Stamford, Texas on May 9th, 1929. He lived most of his younger life in the small town of Avoca, Texas. In high school he was an outstanding athlete in both basketball and football. Following Gayle’s graduation from high school he enlisted in the United States Air Force on August 6th, 1946. He trained as a flight engineer on B-17s. Gayle worked and flew on those aircraft during his three years in the Air Force. He was discharged with the rank of Corporal on August 6th, 1949.
While in the service Gayle was stationed at Aberdeen Proving Grounds in Baltimore, Maryland. While there he met and courted Millicent Anne Eckman. They were married on December 21st of 1949 following his discharge from the service. Gayle and Millicent moved to Pullman, Washington where he enrolled at Washington State University. With the birth of their first child Gayle decided to drop out of college and looked for work in Seattle. He was immediately hired by the Standard Oil Company working at a gas station on Capitol Hill in Seattle. Gayle and his family lived in a small apartment on Capitol Hill for a short period of time.
Gayle was quickly promoted by Standard Oil to a management position at the gas station where he worked. Shortly after the family moved to Mountlake Terrace, Washington. The family grew and then moved to Edmonds. Gayle and Millicent’s family now included four children, Michael, Phillip, Lisa, and Keith.
Gayle decided to branch off from Standard Oil and operate his own Chevron station in Ballard as an independent dealer. He was very successful and was highly regarded in the community. Following his success with his first station he decided to open a second Chevron station. He became one of the few service station operators with multiple stations in the state of Washington.  In addition, Gayle also became a state leader and representative in advocating legislative changes benefitting independent station owners. He testified in Olympia and met with Scoop Jackson in Washington DC advocating better protection of the rights of station owners. Gayle also stayed active in sports coaching baseball and referring basketball games.
Gayle and Millicent lived in Edmonds until Millicent’s death in 2013. Following her death Gayle moved into an independent living apartment in Shoreline. After several years, due to declining heath, Gayle then moved to Bellingham, Washington to live with and be cared for by his daughter Lisa. Gayle lived a happy and comfortable life with Lisa four more years until his passing.
Much can be said about Gayle Salmon’s life. He was a wonderful husband, father, grandfather, and great grandfather. Gayle’s life legacy continues in those he left behind. He is survived by his brother Lynn, his children Michael, Phillip, Lisa, Keith, his grandchildren, Ryan, Patrick, Emily, Danny, Kelly, and his great grandchildren, Connor, Vivienne, Nora, Braxton, Henry and Palmar.  Simply put, Gaye had a long life well lived. He will forever be loved, remembered, and missed by those left behind.