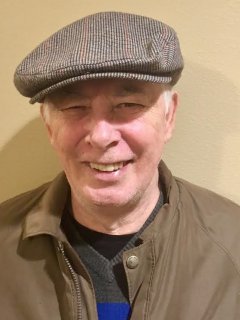 Born:
Sunday, December 23, 1945
Died:
Wednesday, June 15, 2022
Birthplace:
Cut Bank, MT
Service Information:
A celebration of George’s life is being planned to take place in Bellingham, Washington at a later date as well as an internment in Cut Bank, Montana.

It is with great sadness we share with you that George Chidester, 76, passed away on June 15, 2022 at Bellingham’s Whatcom Hospice House with his wife, Janet McKinnon, and her daughter, Liza Yuzda at his side.

Born in Cut Bank, Montana on December 23, 1945, George attended St. Margaret’s School until he moved with his family to Spokane in 1960.

After graduating from Shadle Park High School in 1964, George headed to the University of Washington graduating with a bachelor’s degree in anthropology in 1972.

Then it was on to Boeing, George working out of the Renton office until he retired after a 30 year career.

Throughout his life, George enjoyed sharing his  love for art and sports.

His bold painting brush strokes stood out from the canvasses hanging from the walls of his home, alongside the various sculptures he created.

George had various pieces of poetry published and was a voracious reader.

The sounds of piano often would echo in his home, the product of a skill George taught himself.

Some of his favorite pastimes were golf, shooting pool, baseball, card games, and shooting hoops with his best friend, Mike Henley.

The final decade of his life was spent alongside his wife with great support and love from the Crazy Ladies and their partners.

He leaves behind his wife, Janet, who will deeply miss being by George’s side, and her family.

Janet’s son-in-law Richard, kept loving, frequent contact during the pandemic when visits were not possible.

He also leaves behind his sister Wanda Husman, many nieces and nephews, and  Vanessa Kay Chidester, the grand-daughter of his former wife.

George is preceded in death by his parents, Robert and Mary Chidester, and brother, John Chidester.

The family thanks the staff at Orchard of Bellingham for their caring support and the team at Whatcom Hospice House for providing George’s care in his final days.