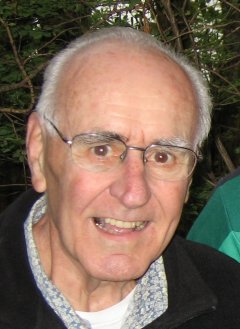 George Comiskey gently passed away at the age of 89, December 16, 2018 with family by his side. Born June 7, 1929 in Vancouver BC, George is preceded in death by his son Patrick Comiskey, his parents, sisters Peggy Carr, Helen Kelly and brother Edward Comiskey. George lived a long and adventurous life and worked hard to support his family. At the age of 16 he joined the Canadian Merchant Marines and supported the allied forces in WWII traveling around the world. After returning to BC, George went to technical college and became a pipe fitter, later joining Bechtel Corp where he served nearly 30 years and became an expert in Nuclear power plant outages. George had a quick wit and comedic timing, he was often the life of the party. He loved to watch and support his children at various sporting events and work on projects around the house. In retirement, George and Laura created a loving community in Lynden, WA where they lived for 23 years.

George is survived and held in loving memory by his wife of 53 years, Laura Comiskey; children Michael Comiskey (Karin), Lisa Monahan (Jeff) and Julie Angeley (Jeff); and grandchildren Claire and Joe Comiskey, Eamon and Teague Monahan, and Maxine and Tulla Angeley. Funeral arrangements are with Whatcom Cremation and Funeral.

In lieu of flowers, the family suggests donations to the Alzheimer’s Foundation be considered.

We are grateful to the loving skill of all the caregivers at the Christian Care Center in Lynden where George was treated with gentleness and respect during his final years.

Laura, Mike, Lisa, and Julie - I am so sorry for the loss of George - We, the Angeley's have good memories of him and also know that he will be dearly missed by all of you - he has joined Pat, and that has to be comforting - I send you my love, and condolences

Thinking of your whole family with the passing of a most wonderful and loving Husband, Father and Grandfather. Much love to you all, Michele, Mike, Audrey and Zach

Thank you for sharing his life legacy. I learned new things about George and have some great memories from hanging at the Comiskey household in Richland. Wishing you all lots of love and comfort.

My sincere condolences to you Laura and your family.  Cherish the wonderful memories you and George shared over the years, Laura. Love and hugs, Marvia.

To Laura, Mike, Julie and Lisa.  The Larsons extend their deepest sympathy to all of you and your families.  George and Laura were great neighbors on Sierra Street and our children loved the Comiskey kids.  We were also very sad to hear of Pat's passing.  Lesli saw Julie's post on FB.  Thinking of you all and hold you in our prayers.  Lovingly sent by Shirley Larson

George was a wonderful man with great wit and charm. He was truly one-in-a-million, and I thought the world of him. Because of that, you have my deepest condolences. I sincerely hope knowing that others share in your grief, will bring you some consolation. Love Mike and Sean.