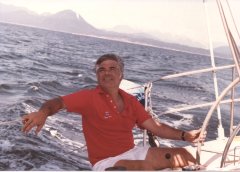 Larry Salkield passed away unexpectedly on June 5, 2019.  Larry was born on November 20, 1939, in Wendell, Idaho, the only child of Jay and Betty Salkield.

He spent his formative years in Dietrich, Idaho, and served in the Coast Guard Reserve in the 1960s.  He went to the University of Washington, where he was a member of the Sigma Phi Epsilon fraternity.  He graduated with BAs in Business and Economics in 1961 and 1963.  He went on to Willamette Law School, graduating in 1965.  He was the first student at Willamette Law to graduate in less than three years.  He went on to NYU where he received an LLM in federal tax law.

Larry married Audrey Gardner in August of 1966.  They remained married until his death. They had two children, Andrew Lawrence (Mary) and Molly Anne (Frank).  He had two grandchildren, Chloe and Oscar Salkield.

He joined Seattle Yacht Club in 1969, and was an avid sail boater and racer throughout his life.  He participated in the 1974 Vic-Maui race, recalled as one of his great adventures.  He served as Commodore of the SYC in 1988.

Larry served on the Board of Pioneer Human Services for many years, and was Board chair in 1989 when Pioneer was recognized with the “Points of Light” award from George H.W. Bush.

He was an avid golfer, playing alongside his wife Audrey.  He served as President of the Washington State Seniors Golf Association in 2008.

He practiced law for nearly 40 years, as well as engaging in other business endeavors.  He retired in 2002.  Thereafter, he and Audrey became snowbirds, splitting their time between Seattle, WA, and Oro Valley, AZ.  They moved their summer home to Bellingham in 2012, where they could be close to their son, daughter-in-law and grandchildren.

Dear Audrey,
So sorry to here of you loss. I am Donna Nelson Talbot.
I am Larry's cousin. Larry and I grew up together in Idaho.
The last time we saw him was in AK. He called us and we went to dinner together. Jay and I emailed each other until he died. Larry is one of my favorite cousins. I surely would have loved to have gotten to know you and your children. We are retired and live in Santaquin Utah now.
Our oldest daughter works at the Mountain View Hospital in Payson. I am four years older than Larry and my husband is Larry's age. Larry was and will always be a great man. Our prayers are with you at this time.

Dear Audrey,  I just read about the loss of Larry in Jill Hearne's comment in Facebook.  Please know how sorry David and I are to hear this sad news.  David has always thought the world of Larry and I remember fondly the times we met up in sailboats in the summertime. May the good memories of him sustain you.  Karen Bennett