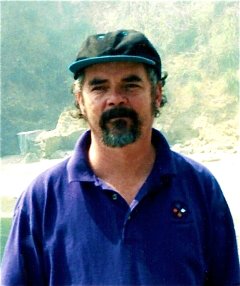 Gregory A. Flanagan, 59, of Bellingham, passed away on August 12, 2011, of a sudden illness. Greg was born in Boston, Mass., and grew up in Connecticut. He graduated from the University of Connecticut with a degree in psychology. Following college, he traveled extensively throughout Europe, Asia and the Middle East.

Greg joined the Army while living in Hawaii and was stationed in Germany where he served as a mental health counselor. After his military service, he continued his travels and education, earning a master's degree in counseling, and certifications in Fisheries Technology and Teaching English as a Second Language. He was also an accomplished musician on multiple instruments. Greg spent the remainder of his life helping others through counseling and teaching. He pursued his love of music, adventure and travel until his untimely death. More recently he worked with the Veterans Navigator Program to help veterans in our area.

Greg was preceded in death by his wife, Dana Didio. He is survived by his father and alll six of his siblings, as well as three nieces and two nephews. Greg's family would like to acknowledge the compassionate care of the medical staff at Saint Joseph's Hospital; the staff and volunteers of the Whatcom County Veteran's Program; and to especially thank the Opportunity Council and Veteran Navigator Program for the comfort and care they provided.

In lieu of flowers, donations can be made to the Veteran Navigator Program (360-393-7685), St. Vincent de Paul, or Catholic Charities.

I wish I had known Greg, my cousin, especially since he lived so close to Joan and I.
I tracked him down at one point and wish I had made contact. My thoughts are with his family.

Thanks, Pam, I'm sure Greg would have been happy to connect to cousins nearby. He was very interested in genealogy and we wondered what happened to all our maternal cousins. Maybe we can share some family history to pass on? That would be a nice legacy.
Susan

Hi Susan,
Years ago I heard Greg was doing a family tree via my father Leo. Leo did shortly thereafter. I tried to find Greg and apparently had some success as I found a Greg Flanagan near Bellingham. I wish I had called the number but alas...felt stupid even trying. A few years later I got your mother's number from uncle Johnny but never mustered the nerve to call. Isn't is strange we all never met?
Where do you live?

My heartfelt thoughts are with you all.I too lost a brother not so long ago. And you just can't grasp the thought that they are really gone.I knew Greg only a short time and he was always kind and helpful to me, He is missed. Sincerely,Donna

Hi Pam--I'd be glad to share info off-site through my e-mail address-don't want to bore everyone with family business.
Your other Cousin Susan

Thank you, Donna, for sharing that. It's nice to know Greg was appreciated by others. And I know what you mean about that feeling that it just can't be real--or permanent.
Susan Flanagan

August 21, 2011
Dear Winny, Susan and Paul
I knew Greg to be so smart and quiet while growing up in S.P. I am glad I had the opportunity to speak with him on Facebook about two months ago ...of the days and memories of our youth. I am so very sorry for your loss.
~ Mary Louise Reardon, Niantic, Connecticut

Dear Winnie, Susan, Paul, Jimmy, Frank and Mark
I am so sorry to hear about Greg's death. My thoughts and prayers are with all of you. Greg's obituary showed what a kind and compassionate man he was, and how many lives he touched. I pray that the love of friends and family help carry you at this painfull time.
Love,
Ethel

Thanks for the kind words Ethel. It was a shock to lose Greg so suddenly...but a huge comfort to see the positive impact he had on people. When Susan and I went to Washington we got to meet his friends and co-workers. What a great group of people Greg associated with. He clearly was loved and an important part of that community. The kindness of his friends and our friends and family has been a big help. I hope to be in Boston for Greg's memorial in Sept...I will give you a call. Susan asked me to also thank you for your kind words...we hope to print all of the comments and have them for the memorial.

Thank you Mary Louise. I am also glad that you got to reconnect with Greg on Facebook. I am sure he loved that...getting to remember and share memories of the SP days. It was certainly a different time and world then wasn't it?

Susan - I wanted to extend my family's condolences for your loss. My husband's Aunt Dana was married to Greg, but we had lost touch over the last few years... My husband spoke very highly of Greg.
I was wondering if you could send me a private email so I could ask you a question? I appreciate it very much and, again, am so sorry for your loss.

Angela-please send an email to me with your contact information and I will pass it along to the family...Thank You.

I would like to hear from anyone from Greg or Dana's family.

Winnie, I stayed with you in New Mexico when Dana and I were vacationing. I would like to talk with you.

Angela, I was a friend of Greg and Dana. I met Dick, Dana's brother, when we lived in Utah.
I'm trying to find out about their last few years since we had lost contact.
Do you have any information or family contacts?
Ann Alexander
Gonzales, Tx.

Dear Susan, I suspect you might remember me, I was Greg's best friend in Germany. I still grieve the loss. I was going through some difficult times around his passing and lost touch. He might have been the best friend I ever had, but he certainly was the reason I got through my tour in Europe. He and Dana put me up while I was working in Texas back in the 90s. They were both awesome people and the world is a better place for their presence here. Pax et Amicitia.