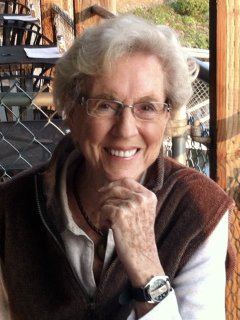 She was born May 22, 1927 in Saint John’s, Newfoundland, Canada to Edward and Elizabeth (Lay) Carberry.

The youngest of 7, Hilson was known for her keen sense of humor, athletic abilities, progressive stance on politics, religion, and her compassion and kindness towards others.

She loved music, singing, nature, a daily happy hour and was an habitual walker.

As a young adult, Hilson played competitive tennis and at the age of 40 took up the game of golf.  By age of 42 her handicap was 13 and her best round was an 82.

Hilson spent the majority of her career helping others in the healthcare industry and at age 18, in 1945 (during the end of World War II) she enrolled as a student in nursing at St. John’s General Hospital.

At age 21 she left St. John’s, and moved to Calgary, Alberta. Eventually, she became a Radiation Technician.  Her career took her back to Newfoundland for a while, to Victoria, British Columbia, and then to Minneapolis, Minnesota.

In 1958, while working at the Swedish Hospital in Minneapolis, Hilson met and married Robert James Darkenwald.

In January of 1960 her first child Elizabeth (Beth) was born. They moved to Overland Park, Kansas later that year.  In November of 1961 her second child Robert (Bobby) was born.  When Catherine (Cathe) was born in 1964, Hilson became a full-time mother. Hilson and Bob enjoyed golf, social gatherings, and were members of Tomahawk Country Club; she also taught her middle child, Bob, the game of golf there.

It was 1976 when she went back to work and in 1980 at age 53, took a position at Overland Park Regional Medical Center as a Unit Secretary in the telemetry department.

In 1981, at the age of 52, Hilson’s husband, and father of 3, Bob, passed away due to a heart attack. She continued her work in telemetry and moved to Lawrence, Kansas for several years before moving back to the Overland Park area.

After retiring at age 66, Hilson, enjoyed time with her grandson, Sean and traveling to spend time with family and friends.

In 2014 at the age of 87, Hilson moved to Bellingham, WA to live near her youngest, Cathe and family in British Columbia.

During her time in the Pacific Northwest, Hilson enjoyed dining out with water views, mountain and island vistas, kind neighbors and the general vibe in the community.

After breaking her hip from a fall in October 2016 and suffering a stroke a few weeks later, Shuksan Healthcare Center became her permanent residence for the last 3 ½ years of her life.
In early April, Hilson succumbed to complications due to COVID-19.

From the East Coast to the West Coast  and in the middle, Hilson Carberry Darkenwald journeyed an interesting, rich and full path through life.

She is truly loved and will be dearly missed and honored in many hearts around the world.

Hilson ! You were a joy and a pleasure to know ! Truly classy lady !! Your daughter Cathe doesn't fall from the tree - may you Rest In Peace knowing you had a great fulfilling & rewarding life & great kids ! I raise a toast to you & see you on the links someday ! ❤️

I was evening house supervisor at Overland Park Hospital when Hison worked as Unit Secretary on 2 West. She was such a pleasant person and so professional in her work.  You always knew that whatever she was working with would be done at the very best level.  She was a very top notch employee. My sympathy goes out to the family.

Aunt Hilson was, without a doubt, my favorite aunt. I remember the first time I met Aunt Hilson, she had just gotten married to my Uncle Bob. My mom and dad (craig and Rose Dow) took me with them to pick up Bob and Hilson at the Kansas City downtown train station. Aunt Hilson taught all of the Dow boys how to play tennis. God bless Aunt Hilson and Uncle Bob.

The photo is very lovely of your mother; the heartfelt summary of her life is most appropriate.

“What though the radiance which was once so bright​

Be now forever taken from my sight,

Though nothing can can bring back the hour

Of splendour in the grass, of glory in the flower;

We will grieve not, rather find

Strength in what remains behind.”

I had the honor of being a caregiver for Hilson. She was so kind and loved to watch tennis on the weekend. She was very proud of her tennis game and told me she was in her town's record book for her tennis abilities.

Hilson will be missed by all, she has touched the hearts and lives of many during her short time here on earth. I have been blessed to have had the opportunity to meet her and help take care of her when she lived in Overland Park Kansas. She will forever live in our hearts and minds. Thoughts and prayers go out to family and friends.