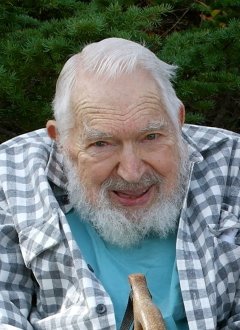 Howard Leroy Harris was born on October 9, 1917 to Leroy and Leona (Miller) Harris at Hereford, Texas, where his parents and grandparents were pioneering wheat farmers in the Texas "panhandle."

When he was two years old they moved back to Iowa where he grew up on the farm that had been bought by his grandparents in 1887. He acquired degrees from the University of Iowa, the University of Missouri, and Hartford Theological Seminary. A life-long Quaker, he was a conscientious objector in world War II and peacemaking and war resistance was a theme that informed and activated his entire life. Child rearing without punishment, and education that enhances natural creativity and curiosity instead of regimented schooling, became a major concern in his life, growing out of both anthropological research and the Quaker experience of spiritual growth.

Howard met Rosemary Crist in 1943 when they were both working at the American Friends Service Committee work camp at Flanner House in Indianapolis, Indiana, and they were married there in May of that year. During the summer of 1943 they took a 600 mile honeymoon bicycle trip through Vermont, New Hampshire and Massachusetts.

Howard taught botany at Friends University in Wichita, Kansas, for three years, spent five years in the pastoral ministry in Congregational and Friends churches, and six years counseling at Whitman Junior High school in Livonia, Michigan. He taught anthropology for three years at San Fernando Valley State College (now California State University at Northridge), and in 1966 became Associate Professor of Anthropology at Western Washington State College (now Western Washington University), and continued in this position until his gradual retirement 1986-1992. He continued to teach correspondence courses in anthropology until the summer of 2014. Teaching anthropology gave him great satisfaction. He often said that he was fortunate to get paid for doing what he loved to do anyway. A life-long conservationist, hiking and backpacking, especially in mountainous terrain, was a major joy. The photo included in this obituary was taken on his 97th birthday up at Artist Point near Mt. Baker. In December of 1966 he and Rosemary, along with a friend, started the Peace Vigil in downtown Bellingham, which still continues today. In 2005 he was the first recipient of the Howard Harris Lifetime Peacemaker Award, named in his honor.

Rosemary died on January 1, 2009 and their granddaughter, Anna Rosemary, died on April 2, 2013. He is survived by his sister, Fern Glass of Tallassee, Alabama; his six children: David, Heather (Andrew) Ezrre, Holly, Timothy (Ellen) and their daughters Sophia and Emily; and Stanley (Karen) and their children Geoffrey (Jennifer), Nicholas, Althea, Thomas, Alexander and Violet, all of Bellingham; and Stephen (Margaret) of Newton, Iowa and their children Elizabeth, Katharine, Benjamin (Roslyn) and Mary (David) Chatfield; and seven, soon to be eight, great-grandchildren, as well as numerous nieces, nephews and cousins.

A memorial service will be held at 2:00 on Saturday, December 13 at the First Congregational Church in Bellingham. Memorial gifts may be sent to the Whatcom Peace and Justice Center, P.O. Box 2444, Bellingham, WA 98227; The American Friends Service Committee 1501 Cherry St., Philadelphia, PA 19102; or The Friends Committee on National Legislation, 245 Second St. NE, Washington, DC 20002.

I came to WWSC in the fall of 1969. I had some idea of what it meant to have personal values and to live them out publicly, but I had never known anyone personally who exemplified this to the degree that Howard and Rosemary did. (I also think of the two of them together, never just Howard or just Rosemary.) There they were, Friday afternoons in front of the Federal Building. I saw them there one Friday. And the next. And several months later. And the next year. And the next. When there were candlelight marches and vigils in front of the Federal Building, there they were again. I met them when they were living in their little house that is now a parking lot on the south of the campus. I know that many of us in this community have been changed for the better by their public witness for peace. To the family, I am sorry for your loss. I am sure that it seems unbearable, but I know that you all have one another to share memories and stories. Although it would be possible to say something about a little light in our world has gone out with the passing of Howard, I believe in all sincerity that the light of conviction as shown by Howard will glow in our community forever. Peace and blessed be.

He's the last one of the professors that were here when I was hired initially as a non tenure track professor.  He outlived the last spouse also, Carol Diers, who apparently died shortly before he did.  I was incredibly fortunate to get hired into this Department.  The war stories that Angelo and Herb would sometimes reflect upon were offset by Howard's presence.  They valued collegiality and were superb teachers.  Howard, in particular, required lots of writing and his teaching assistants worked hard.  Teachers can make a difference in so many ways and Howard is a model for all.   His loss has hit me very hard.  And he was so wickedly sharp to the very end.  Quaker quiet but steel within.

Howard Harris was my favorite professor when I attended what was then WWSC in 1973. I was more mature than the majority of the18-19 year olds in the sociology of religion class that he taught and deeply appreciated his presence and spriituallity and although I only had the one class with him in my short time there I never forgot him.  Decades later I was prviledged to get to know his son Tim Harris and daughter Holly Harris.  What a truely wonderful family. My best wishes to Tim, Holly, Ellen and the entire family at this time.