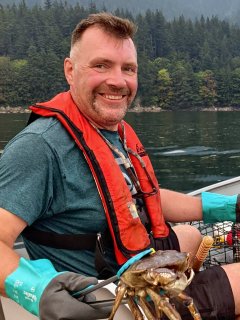 Ivan Alastair Knight was born at home in Stafford, United Kingdom, on June 17th, 1969, to Anne Dilys and Kenneth Raymond Knight. Ivan took his last breath in Whatcom County, WA, on April 19th, 2022.
Ivan attended Leasowes Primary School and Walton High School in Stafford, U.K., followed by Stafford College. Ivan served in the Corps of Royal Marines from 1985-1988 and was a member of the Royal Marines Rugby League. Ivan worked a variety of jobs in the U.K. including Sales with Peugeot Talbot, the positions of Licensed House Manager, Deputy Area Manager and Retail Area Manager for Allied Domecq Leisure, Sales Manager for DHL in Jeddah, Saudi Arabia, Area Business Manager for Scottish & Newcastle and Regional Manager for First Leisure Corporation.
During his years in the United Kingdom, Ivan was passionate about Harley-Davidson Motorcycles, photography, skiing, hiking, Reiki and world travel. Ivan's passion for travel and Harleys led him to take a solo holiday to Arizona where he rented a Harley and toured the Southwest. Ivan and Chloe met during that holiday on February 21st, 2003, at the Crystal Palace Saloon in Tombstone, AZ, and they married later that year in December of 2003 in Bellingham, WA. Ivan and Chloe lived in their first home in Maple Falls, WA, from 2004 to 2009 and they welcomed their first son, Jacob, in 2004. During that time, Ivan worked for Bank of America, Whatcom Educational Credit Union and Skagit Powersports prior to starting his career as an operator at the BP Cherry Point Refinery in 2008 where he also served on the BP Cherry Point fire team and remained employed there until his passing. Ivan was also a volunteer with the Whatcom County Fire District 14 while living in Maple Falls.
Ivan and Chloe moved to Ferndale, WA, in 2009 and later welcomed their second son, Jude, in 2011. On July 4th, 2012, Ivan proudly became a citizen of the United States of America. In 2009 Ivan traded his passion for motorcycles to mountain biking and road biking and then threw himself into learning everything that he could to become the most skilled rider that he could be. That drive was typical of Ivan's nature and he excelled at everything that he put his mind to. He could be found happily riding the trails of Galbraith, along with hitting the trails around Winthrop and Leavenworth and adventuring on a few extended mountain bike tours around the Northwest and Southwest. On Ivan's 49th birthday he was given a banjo after mentioning interest throughout the years. He immediately began to focus on learning the banjo and his daily discipline was admirable. At the age of 51 Ivan also took up learning the dobro guitar and he filled the family home with beautiful melodies from both instruments. He added his desire to learn the harmonica only four months prior to his passing. Additionally, at the age of 51 he took up fishing, bought a boat, and strived to learn all that he could. He loved fishing with Jude as often as possible and enjoyed the hunt for Kokanee, trout, salmon, bass, and going crabbing off of Chuckanut with Chloe. Ivan was an ethical, intelligent man who was full of common sense, grit and the desire to give everything his best effort. When he wasn't working or following his passions, he deeply enjoyed spending time with his family and relaxing around the campfire with a good whiskey in hand.
Ivan is survived by his wife, Chloe Knight, and their sons Jacob Knight and Jude Knight, all of Ferndale, WA, his mother Dilys Knight and father Kenneth Knight of Stafford, U.K., and his sister Anthea (Mike) Miles of London, U.K. Ivan is also survived by a large extended family of aunts and uncles and cousins in the United Kingdom, his sister-in-law and brother-in-law of College Station, TX, and their daughters, his beloved nieces, Emma and Maya, and his BP family.
A special thank you to Officer Brian Lewellen of the Ferndale Police Department, Whatcom County Support Officer Ron Houtsma, and Tim Powell and Anna Balivet Jordan of Whatcom Cremation and Funeral who have all provided the perfect balance of professionalism and tenderness to Ivan's family during this difficult time. Please help yourself and your loved ones and call the National Suicide Prevention Lifeline at 1-800-273-8255 if you are struggling.

My heart goes out to Chloe and the boys! Ivan was an amazing guy and will be missed by all who knew him!

I knew Ivan many years ago when he was in his late teens and dating a close friend of mine. We had a very similar sense of humour and he was always making me laugh. I can hand on heart say that he was one of life's True Gentlemen. RIP Lovely Man x So sorry for your loss Chloe and your beautiful Boys xx

Bob & I would like to send our deepest condolences to you and your family. We are so sorry. Ivan was a special soul that will be emensily missed. Keeping the happiest memories of him in our hearts will keep him with us .  Thinking of you.

In February 2003, Chloe and I walked through Tombstone to met you.  It seemed destine.  As we walked past the saloon door, Chloe said, “I love this song.”  I didn't recognize it.  She quickly turned on her heals and we were though the saloon door in a moment.  My memory is fuzzy after that.  Where you there before we came in?  Did you come in after us?  I can’t remember.  What I do remember is that you and Chloe hit it off the moment you met.  I could see it in Chloe's eyes.  And, even though I didn't know you that well, I could see it in yours, as well.  We had a great adventure that weekend . . . breakfast the next morning, then hiking Chiricahua National Monument.  As we hiked, I could see that this was not just a casual encounter.  On the drive home, in speaking with Chloe, I knew this was a relationship that would impact her life for a long time.  I couldn’t foresee, at that time, how much this meeting would change both your worlds.

Chloe moved to Washington not long after that adventure.  I was only able to visit with you a few times in Washington since that weekend in Arizona long ago.  What I remember is your strong presence, your dedication, your intelligence, and your humor.  I truly had hoped to see you again in the future.  Maybe someday, in some unknown way, I will.  Take care, Ivan.  You will be missed.

P.S.  Chloe, Jacob, and Jude . . . My heart goes out to you.  I wish I had magic words to make everything right again.  Since I don't, I just want you to know that I'm sending heart love your way.

Ivan, your passion for whisky is so deeply appropriate. You were the type of soul that could somehow reach into and warm a person's heart with rare talent like a fine liquor. I always looked forward to our morning interactions when I first came upon your legend, and anytime I was lucky enought to come across your bubbling soul, from that point forward. Whether it was at the permit counter, or when my crazy dog was trying to run you off the trail, I cherished those encounters. With each passing conversation, I came to learn how much we truly had in common in our journeys on this planet. In reality, it was just your innate ability to speak to, and relate to people with all of the amazing life experiences from which you could call upon. Ivan, you were one of those that helped "my cup runeth o'er." I just wish that I could have done more to help fill yours.