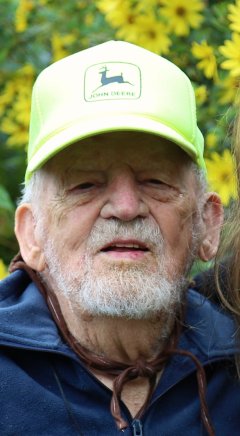 James “Wayne” Finet: Wayne took his final journey on 04/11/2022. Wayne was born May 23, 1928 in Dunlo Pennsylvania to Alphonse and Nellie (Price) Finet. Wayne enjoyed a long and interesting life. Wayne’s father Alphonse was first generation from Belguim. Alphonse better known as Boyd was a life-long coal miner starting in the mines at 10 years old when his father died. Boyd spent over 50 years working in coal mines in Western Pennsylvania. Boyd taught his son Wayne how to hunt, fish, garden and split rock. Boyd and Wayne chiseled out rock (and memories) to make a basement under their home in Dunlo.

Growing up Wayne worked part time in coal mines alongside his father. After high school in 1947 he joined the U.S. Army and spent time in the Philippines and Korea. On discharge he enrolled at the University of Pittsburgh and earned a BA degree while working nights in steel mills. He was the first person in his immediate family to go to university.

After university in 1952 Wayne along with 4 friends went on an adventure driving the new ALCAN Hiway to Alaska. Once in Alaska he went to work at a remote coal mine in Suntrana 150 miles Southwest of Fairbanks. Working at the coal mine he met Lorraine Ableman from Whatcom County who was working in the mess hall of the coal mine. Lorraine’s family relocated temporarily from Whatcom County when the coal mine in Bellingham closed down. Lorraine’s Dad James (Jim) worked in the mine in Suntrana many times along-side of Wayne. After a short engagement Wayne and Lorraine were married on Ground Hogs Day 1953 in Fairbanks. To get to Fairbanks it was either by plane or train, it was minus -50˚F on their wedding day. Wayne, Lorraine and the Ablemans played cards, hunted caribou and moose and fished whenever they had time. Wayne and Lorraine’s Alaska adventures were some of their best memories and always a source of conversation.

On June 30, 1955 Wayne and Lorriane’s first child Jan Marie was born. Shortly after Jan’s birth Wayne and Lorraine moved from Alaska back to Whatcom County. and settled in on the Medcalf Rd. in Laurel across from the Ableman family farm where their 2 sons David and Brian were born. The Ableman family still owns the farm on the Medcalf Rd. it is great place steeped in memories for so many family members.

Once in Whatcom County Wayne went back to school and received his teaching credentials from Western Washington College and started teaching English and French at Nooksack Valley School High School, working at Kelly Farquhar cannery in the summers. Later he worked summers as an immigration officer at the Sumas border crossing or on board the ferry Coho between Port Angeles WA and Victoria BC.

In 1961 Wayne and Lorraine bought the 80acre Helgeson homestead on Siper Rd Everson where they raised cattle, rabbits, chickens and their kids. The relationships Wayne developed with students and fellow teachers in the 1950s and 60s were important to him for the rest of his life. Wayne taught at Nooksack until he received a scholarship opportunity in 1965 to get his masters degree in counseling from Syracuse University. Wayne and Lorraine packed up the kids for an adventure to Syracuse New York for a year. While at Syracuse the Finet family met the Godfrey family and established a close relationship that lasts to this day.

On their return from Syracuse to the Siper Rd. Wayne went to work as a counselor at Cascade Middle School in Sedro Woolley and Lorraine went to work at Hinotes furniture in Everson. Wayne drove winding Hwy 9 every school day until 1983 when he retired.

In the mid 1970s Wayne and Lorraine along with Jim and Shirley Ableman bought a lot on Eliza Island, they spent a lot of time fishing for blackmouth, clamming and rockhounding. It was a great getaway for so many family members. Scott and Gina Ableman still have a camp adjacent to the original camp and graciously invite family and friends to enjoy life on the Island.

Wayne loved to garden, hunt, fish and spend as much time outdoors as possible. He and Lorraine spent many vacations fishing up in British Columbia with friends and family. The annual deer hunting trip to Twisp with his “Yellow Hat” brethren was an ongoing topic of discussion and created some of his fondest memories and friendships. He could go on and on about all they bucks they shot and all the bucks they missed but it was the time he spent with Jeff Price, Dick Gelwicks, Jim Wortley, Gary DeGraf and all the other hunters that was most important to him.

Wayne was a Camels Club member and had a broad social network. He loved nothing more than making the rounds to the casinos, coffee shops, auction barn and swinging by friends and family to visit. He loved people and the conversation he could strike up a conversation anywhere, anytime with almost anyone.

Wayne and Lorraine spent thousands of hours talking, laughing, crying and joking whether at the kitchen table, in a boat in the Cariboo BC, at Eliza Island, playing pool at the Little Roadside Tavern or gardening before Lorriane passed away in 2012, she was his rock, loving and devoted.

Probably the biggest positive impact in Wayne’s adult life was being welcomed into the Ableman Family. His family back in Pennsylvania was loving but not nearly as tight-knit as the Ablemans and being welcomed into the family by Lorriane’s parents Jim and Exzilda and her siblings was very important, he often mentioned that the Ablemans taught him what being a family was all about. Wayne loved the extended Ableman family and cherished all the memories and times together.

We can only imagine the conversations Dad is having with family members in heaven, and the stories of course the stories.

There will be a family gathering scheduled sometime this Spring or Summer to celebrate Wayne's life.

In memory of Wayne, a donation may be made to Hospice of Whatcom County or Opportunity Council.

Dave, very sorry to hear about your Dad.

One of my favorite teachers at Nooksack. He always came to our class reunions. 1962

Mr. Finet was my favorite teacher at Nooksack. He was an awesome man!

<p>Mr. Finet was my favorite teacher at Nooksack. He was an awesome man!</p>

Mr Finet was a great teacher during my NVHS years. Since then it has been great to see and visit with him at reunions,and those memories will last on.

Mr. Finet was an awesome teacher at either French or Senior English.  In truth he was a much better teacher than I was a student, at least in French.  But he was oh so patience.

And it was a treat to greet him at the reunions and catch up on life.

Know that we’ll be keep you in our prayers as you continue our journey “home”.

One of my favorite teachers at NVHS. He was always a calm and reassurung presence in the classroom.

Dave, I'm sorry to hear of the passing of your dad. I remember his humor and laugh! We have just recently said our goodbyes to a parent, and even though we know that day is coming, we are still never prepared. Their death takes a piece of our heart with them. Our thoughts are with your family.

I appreciate the kind words and thoughts. He was a great Dad, couldn't have asked for anything more. I talked with your Dad a couple weeks before your Mom passed and he let me know things were tough for her. It brought back a lot of memories, good memories. Your Mom and Dad were so nice to me and treated me with respect and patience even when I didn't desrve it. Whenever I ran into your Mom she was always so happy and interested in how my life was going. Wish you, Rich, your Dad and family health and happiness.

Thanks Darrel, much appreciated