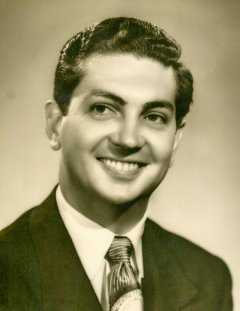 Born:
Tuesday, October 18, 1927
Died:
Monday, April 16, 2012
Birthplace:
Pasadena, California
Service Information:
A memorial for John will take place at 11:00AM, Tuesday, May 22nd at Emmanuel Faith Community Church in Escondido, California. 639 E. Felicita Ave. (760-745-1781) A reception will follow immediately after the service at the same location.

John Collins Bronaugh, beloved son, husband, father, brother, uncle and grandfather, passed into eternal life on April 16, 2012 at the age of 84 from complications of Alzheimers.

Born to George and Rose Bronaugh on October 18, 1927, in Pasadena, CA, John spent his early years in San Pedro, CA and graduated from San Pedro High in 1944. He served in the navy from 1946-1948. He graduated from USC with a BS in Electronic and Mechanical Engineering. John went on to work as an R & D Engineer for Conic and Cubic Corporations in San Diego, on projects patented for military defenses during the 1960-and 70's. John left the industry in 1977 and became a real estate developer. He created two corporations Melido and Melidon and spent the next 20 years following his passion.

In 1950, John married his childhood sweetheart, Miriam Cassady in San Pedro. The couple settled in Escondido, CA from 1959 -1977 where they had three wonderful children: Melinda, Lisa and Donald. The children grew up on a 5 acre ranch surrounded by animals and citrus groves. John and Miriam moved around after 1977 from Temecula, CA, to Las Vegas, NV and eventually moved to the Bellingham, Washington area in 2002.

John enjoyed hunting, fishing, photography and listening to music. At one time he was considered pretty good at playing a jazz piano. John was very methodical and talented in anything mechanical. He enjoyed working on and rebuilding cars with his brother Don when they were younger. John loved to tease. He had a great sense of humor and loved to play practical jokes on family members. He was a man of high honor and integrity. What he enjoyed most was kidding around and relaxing with his family.

~ There is no old age. There is, as there always will be, just you. ~ Maya Angelou

I knew John to be a very honest, ethical and moral man and was glad to have have had the oppotunity to work with him and Miriam. He kept me on my toes in looking after some of the family finances but also entertained me with his quick wit. He will be sorely missed but always remembered. I know he is in a better place!

I am a cousin of John and his brother Don. I have admired John for many years as he had the same disease as my mom, Jo Miller had. I know this has been a very difficult time for his family and friends. I know that John is in heaven with my mom and dad, his mom Rose and his dad all being very happy at being together again. Rest in peace John. We all love you and will miss you. Love Marianne

Dear Bronaugh family,
My memories of John are of always cheerful and a smiling greeting, interested in the other, caring. I hope that with his passing, all your memories of him at his best will spring forth.
Love, KJ

To the Bronaugh Family:

I have great memories of seeing cousins John and Don at family gatherings in San Pedro and both wife, Jane and myself plan to be at the service on May 22nd.