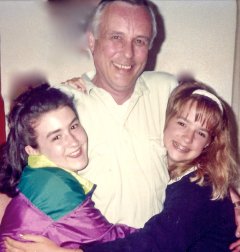 John was born June 3, 1942, in Portland, OR, to John (Jack) Hoyt, DMD, and Lucile Hoyt. He was raised in a loving, traditional family and enjoyed all the freedoms and adventures that a young boy could have growing up in what was then a rather innocent era. Among other things, John and his friends could hop the bus in their Alameda neighborhood and travel, unsupervised, to downtown Portland. In later years, John admitted to having explored the former Meier and Frank, now Macy's, from top to bottom, even managing to find passageways behind the walls.

John loved spending time at Shady Acres, the family get-a-way near the Sandy River. The property, which first belonged to John's grandparents, Charles and Minerva Hoyt, and later came to John's father, was a cherished gathering spot for family and friends and the scene of many holiday picnics and celebrations. Long after the property was sold and loved ones had passed on, it was a rare Labor Day or Fourth of July when John didn't say it still felt that we should go celebrate at Shady Acres. It truly was an idyllic place in which to create lasting childhood memories. After John became a father, he delighted in watching his own children race along the trails and pick berries there as he once did.

John attended Alameda Grade School, then graduated from Grant High School in 1960. His work life ran the gamut from starting a diaper service to owning a used furniture store to serving as the licensee of an Oregon Liquor Store in Gearhart. In his later years, he held jobs with Thousand Trails, La Conner, WA; and worked as a security officer at Skagit Valley College in Mount Vernon, WA. John retired in Lynden, WA, to be close to nearby family in Bellingham.

There are people whose upbeat presence can mean the world to others, and John was one of those people. Since his passing, many friends and acquaintances have commented on John's brilliant smile and how it brought cheer to their own lives. Even as he was challenged by health problems in his later years, John continued to make every effort to project a positive attitude.

An enthusiastic conversationalist, John loved discussing current events and would freely express his disgust with the posturing and self-serving interests of numerous politicians and the impact this was having on our democracy. He enjoyed thinking about our rapidly-changing world but also mourned the passing of simpler times. Technology was never his “thing,” and cell phones and computers seemed to twart him no matter how hard he tried to master them. (If anyone reading this has sent John an e-mail or left a voice recording in recent years, please know that computer crashes, password amnesia, and the various malfunctions of any electronic device he touched probably meant John never received your message.)

A man who always carried a white linen handkerchief, John was old-fashioned in the very best of ways. He had a great sense of humor, was a good listener, and dearly loved children. A favorite family memory is of John hovering in the doorway of the birthing suite when his great nephew, Jackson, was being born and, along with Jackson's parents and grandparents, delighting in the joy of welcoming the baby into the world.

John was a man who loved deeply and had an enormous capacity to appreciate his world. He valued the arts and was moved by the power of words and music. More than anything, he cherished family memories and often reflected on the people who had been an important part of his life.

John will be especially missed by his Washington family including sister Eileen Hoyt Woods and husband, Wayne; nephew Daniel Woods and wife Jennifer; niece Laura Hoyt Woods (currently residing in Iowa); and great nephew Jackson Woods. For many years John was an honorary member of the Woods family. We feel fortunate to have had him near us and will value the memory of John's place in our lives.

The family wishes to thank the many, many people who have cared for John as he has faced multiple health challenges. We strongly feel that while the health care system is broken, our caring community of health care workers forms the glue holding it together.

We would also like to thank Charles and Cheryl Bowhay, Sally Bauma, Greg Stern, Jodie Barbour, and the many others whose friendship and support gave them a special place both in John's heart and in our own.

John will be missed as a treasured member of the Woods family. His smile and good nature was a fixture at Woods holiday gatherings over the last 15 years. With my wife, Jenny, and our son, Jackson, I mourn the loss of a very special uncle.

John will be missed for his easy going, gracious nature. I will especially miss his deep, rich, melodious voice.

John was a caring, affectionate person who you could always count on for a great conversation or a strong hug. The love and support for he shared with those he cared about will be missed.

I am very sorry to hear of John's passing. I am the grandson of Charles (Dick) Richard Hoyt - John's father's brother. From the obituary he sounds like a wonderful man.

My cousin Brian Hoyt and I are organizing a Hoyt family reunion on Friday and Saturday, August 18-19th in Portland. Selfishly I am sorry that John passed away before I had the chance to meet him. I now live about 10 blocks from where John grew up.

I do hope that many of the Hoyts from Charles Elfred and Minerva can make it to the reunion.