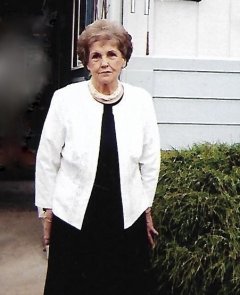 Born:
Tuesday, May 28, 1935
Died:
Friday, April 24, 2020
Birthplace:
Bellingham WA,
Service Information:
Jonlyn chose to not want a funeral. She will be laid to rest at Ten Mile Cemetery on May 7th. Her final resting place is between her two great loves, John E. Boerhave and James A. Hansen.

Jonlyn "Babe" Anna Margaret Larsen Boerhave Hansen passed away on April 24th, 2020 at the age of 84, at home.
Jonlyn was born in Bellingham, Wa to Robert W. And Edla Larsen on May 28th, 1935. She grew up in Acme, Wa and graduated from Mount Baker High School. Jonlyn was a class officer, part of the pep club, editor of the paper, student body officer, and worked hard to be a part of the torch honors society.
In 1954, Jonlyn married John E. Boerhave. Jonlyn and John and had three beautiful daughters. Unfortunately, in 1973, John lost his life to cancer at 38. "Babe" and John were in the process of buying the strawberry, raspberry and other row crop farmland that they were living on and farming. With John's passing, Jonyln and the girls decided that she would pursue farming. Babe ended up becoming a prominent berry grower. She bought the first mechanical berry picker in Whatcom County and had people from New Zealand and China come to her farm to see her picker at work. Jonlyn's berry farm shipped berries to canneries for ice cream, juice, flavorings, and throughout the United States as cold pack for retail sales.
In 1978, Jonlyn married James A. Hansen.
In 1982, Jonlyn was elected president of the Western Washington Horticulture Association. She became the first female president of the association had ever had. Babe was part of the Washington and Oregon Red Raspberry Commission. She was an advocate for Whatcom County's row crop farmers and spent an abundance of hours championing their work.
Jonlyn's accolades are too numerous to mention. She was part of and accomplished many great things in her lifetime. She took pride in her help she gave her countless employees and pickers. She helped put food on their tables, send their children to college, provide cars, new school clothes and supplies, amongst many other things. Jonlyn gifted many organizations through contributions and volunteered time.
Babe had a knack for letting you know her opinions, whether she approved or disagreed. She often left people in a state of wonderment with her responses. Babe was not afraid to express herself in ways that made other people see her sincerity or disappointment. Jonlyn explained that honesty was the best way to make things clear for all involved. She had a way with words that often left others speechless.                                                                                                                                                                       The morning of Jonlyn's death, her dedicated daughter Jerilyn was by her side. To honor her wishes, Jerilyn became her nurse, taking care of her every need. Her granddaughter Jolene and her friend Josh were with Jolene's "grandy" every day. They came to visit and to help with Grandy and try to bring her spirits up. Having her loved ones around brought Jonlyn pleasure and kept her spirits high.
Jonlyn is survived by her daughters, grandchildren, great-grandchildren, nieces and nephews.
If Babe touched your life, Jerilyn and Jolene would like any gifts to be donated to Whatcom Hospice and In Home Healthcare thru Hospice. 2800 Douglas Ave, Bellingham, WA 98225. (360) 733-5877.

Babe was a force to be reckoned with. We bought the place on Central Road in 1992. We stayed in touch with Babe and Jim for several years and have very fond memories of them. Neighbors still ask about her and have fond memories of picking berries and buying snacks at the snack shack. Both Ken and I are so sorry for your loss.

My "grandy" (she wasn't a grandma, she was a grand old dame) sure was a force to be reckoned with! Losing her has been terribly hard but hearing all these fond memories from people have made me realize how truly special she was. Thank you! ♡

Jerilyn, i have been searching for your phone number without success. I would like to thank you for the pics of my father's side of the family, & i am so sorry for your loss. I have been impressed with the way you helped my father in his last years. I know you did the same for your mother, it has been my pleasure to have met & known you. You are a beautiful person inside and out, be at peace knowing you did a great job with our parent's Jim

​I loved you from the start.

You were a kind and giving person.

Sending us clothes and gifts to Alaska was so exciting to when we first joined the family.

When we came to visit you in Washington you always welcomed us with open arms.

We were amazed at your lovely home and all the berries there were to eat.

Each time I left your house in the last few years I had a car full of treasures so when I garden there is always something to remind me of how giving you were.

To my Dear Aunt Babe, We lost a good one....and i know you are around us. I will always remember you when I pick my berries. Thank you for being my friend and my Aunt.  You were a great listener and always on my side!