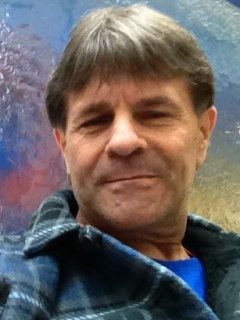 Kelly was born in Arlington, Washington and was raised in Concrete. He graduated from Concrete High School in 1977.  He lived with his wife of 17 years, Cheryl, in Glenhaven at the time of his death. In his younger years he worked as a logger, operated heavy equipment, and in 1996 started his own brush cutting business, Northwest Brush Mowing, Inc.

Kelly is survived by his wife Cheryl and their daughter, Tia, as well as 3 step-daughters: Dana (Marc) Kempler, Christy Baker (Scott Taylor), and Tiana Marshall.  He leaves behind 8 grandchildren, 3 "bonus" grands, and 3 "others" very dear to his heart, 4 great grandsons, and "the boys", the family "puppies", Caleb and Samson.  He is also survived by a sister, Shelley (Chris) Heck, and nephews Michael (Millissa) Macomber and Jason Clark and their families.  He was preceded in death by his parents, Leonard and Donna Macomber, and a sister, Colleen.

Kelly was an avid snowmobiler, and even though he had not ridden in years he still followed the sport.  He loved the beauty of the snow and the view from the mountain top. On the trail or looking at the valley below, he had a deep appreciation for the beauty of creation. He had a brilliant mind, and re-engineered (even if only in his mind) almost everything he put his hands on. He had hoped to one day build a special fuel-saving motor.  The highlight of his inventive talents was the brush cutter he designed and used in his small business for nearly 2 decades. He loved snowmobiles, motorcycles, trucks, anything with a motor.

Kelly loved the Lord and worshiped at Haven Church in Everson, where he attended with his family since 2020.  His happiest moments were playing with his pride and joy, his daughter, Tia.  He loved watching her learn and grow, and creating fascinating things using her own imagination and her blocks and toys.  As her main caregiver for the first few years of her life, the bond between them was deep.  They had many adventures together, and at home she was his right-hand assistant.

A private burial took place on August 25 at Nooksack Cemetery in Everson.  A celebration of Kelly's life will be held on October 8th at the Glenhaven clubhouse. In lieu of flowers, donations can be sent to Haven Church benevolence fund at PO Box 383, Everson WA 98247 or given online at www.thehavenchurch.org.  Click "donate" and proceed.

Thank you to all of the first responders who tended to Kelly, to the kind Whatcom County Support Officer who stayed with his family until others arrived, and to the community members who came to his aid, also to all of those who have reached out to his family, offering comfort and overwhelming support.

Kelly is very loved and sorely missed.  His enthusiasm was invigorating and inspiring.  We learned so much from him. We look forward to seeing him again in heaven.

So many youthfull memories, Thank you Kelly.

Kelly was a gentleman even at the tender age of 18, & so proud of his beautiful green pickup truck!
I remember when he csme into the chuckwagon drive-in, his kind spirit & respectful manners. The love of his life was Cheryl, way back then! He loved tslking about her, & would light up whenever he did!
Kelly, you were a superstar, & I'm grateful to have crossed paths with you even in those teen years!
May your fsmily forever be blessed by your presence of spirit~

I feel so lucky to have had a chance to meet Kelly. I know you all have many beautiful memories to cherish.

May his memory be a blessing.

I enjoyed Kelly's company, great talks over a steak. He was really down to earth, such a hard worker. Even though in pain and limitations due to a previous injury, it never slowed him down. Praying for his family, and glad to know he kept the faith. Blessings from Pastor Tyrone Garay.