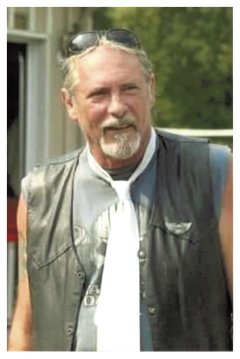 Kenneth Vaughn Hubbard of Lynden, Washington, was born in Bellingham, Washington on September 25, 1947 to Duane and Chestella Hubbard.

"Hubb" died on Sept 27, 2020, from complications of diabetes and Alzheimer's. He was preceded in death by both parents and his brother, David who died as a child.

Hubb loved his kids, his wife, his guns, his Marlboro Red in a box, his little dogs, his Harley and his Black Velvet. Not necessarily in that order. He was an avid reader whose favorite literary works included Shotgun News and Guns and Ammo of which he read volume after volume. He hated rain, the song "You Are My Sunshine" (as performed by Johnnie Johnson), Democrats and liars. Not necessarily in that order. He was a master body and paint man who built his business, Hubbard Body and Paint, from the ground up. Hubb was also great at gardening, gunsmithing, and hitting beer cans at thirty yards with his 45. He was a collector of Everything! He was well known for being a member of the Pilot and Leverite Clubs, he would pile it over there or leaver right here.

Marshall Matt Dillon, The Rifleman and John Wayne were his TV heroes. And he was a larger than life hero for his six children: Kenny, Angela, David, Karen, Jacque and Jennifer. He met the love of his life. Johnnie Johnson in 1996 and they took their vows in 2008 with his son, Ken Hubbard Jr., officiating. He was an honest and faithful friend to those that shared his interests and stories. When Hubb took off for that big gun store in the sky, he left behind his kids, Ken Hubbard (wife Patty) Angie Cole (Husband Eric) Dave Hubbard, Karen Hubbard, Jacque Hubbard and Jennifer Hubbard; his brother Mark Hubbard and sister Dawn Hubbard. He will be missed sorely by his six children, seven grandkids and two great grandkids. He treasured his family.

Special thanks to Gittle Goodman who cared for him as a patient and a person for the last 25 years.

There is an old saying "It's not the destination that counts, it's the ride." Thank-you from all of us, Ken Hubbard, it was one hell of a ride.

What was wrong with my singing?  Just kidding.  I Loved you for 22 years and will continue to love you for the rest of my life.  You were my safe place, my soft spot to land, and I always felt safe with you.  I am heartbroken that you had to leave.  You were my life.  I know I will become stronger and I will see you in heaven.  Until then, I miss your hugs, your kisses and even your one eybrowed dirty looks.  Ride fast and free.  Take your dad for a ride. I love you.  Johnnie

Beautifully written Johnnie. He is a great man who will truly be missed. Ride on brother. I love you so much.

Thank you Aunt Johnnie. That was beautiful. You were the best thing that ever happened to him! Uncle Ken, We'll miss you we love you and some day we'll see you again. Say hi to grandpa for me.

Know that he loved you too <3

You have my deepest sympathy. You have traveled a long road & have done so with great love.

It was an honor and privilege to have 'cared' for Hubbard for so many years..............'Hubb' for short, I am now realizing!  This originally stoic, Harley riding man was NOT a hugger when I met him :) However, I AM!!!  So, fast forward and here we have 'Hubb' asking me, "where's my hug?" If I did not greet him with a hug as he entered the office!!!  Since COVID has limited us all from interacting these past many months, I asked Johnnie to tell him I was giving him a HUGE hug as he rode his Harley to that great big gun store in the sky!!  Johnnie has been a ROCKSTAR through this challenging time..................her sincere and deep love for this MAN was so evident over the years and she has the best sense of humor which I have always appreciated (laughter is the best medicine after all!).  Life is a journey, so grateful to have met Hubbard on my journey....................peace, blessings and HUGS to everyone...............

My heartfelt LOVE to you Johnnie, so VERY thankful for the wonderful friends I met while working at the post office and living in our cute little town. ALWAYS met with a smile and caring word from you and Ken EVERY time we crossed paths. Love and HUGS my friend❤

We are so sorry for your loss and send you the deepest sympathy as you remember and process through the loss of Hubb/Dad. He was truly a remarkable man who will live on in your memories and stories of all the wonderful moments that made up his life. May you see his love and devotion to his family and friends through every funny story or memory you have of him.