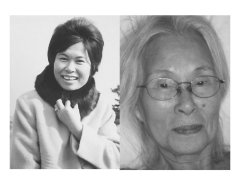 Kimi Sakamoto Ferry was born on January 28, 1928 in Tochigi-ken, Japan. Kimi's childhood was cut short by the Second World War. She was the third eldest of 8 siblings, and as the two eldest sisters were sent away to work, it fell upon young Kimi's shoulders to quit school in the 6th grade and stay home every day to help her mother raise the younger siblings. Despite her formal education being abruptly and permanently derailed by World War II, Kimi eventually would, as an adult, go on to learn and speak English fluently, live in 4 different countries, and travel all over the world.

In the 1950s, in post-occupation Japan, Kimi met Joseph V. Ferry, an Italian American from Arlington, Massachusetts. Joe was a Department of Defense civilian who, at the time, served as an Education Advisor on a U.S. military base close to Kimi's home. They married in 1955, and moved to Germany for Joe's next assignment. After their time in Germany, Kimi & Joe moved to France, where their only child was conceived. Kimi & Joe's daughter, Kim was born in 1966, at which time the Ferry family lived on Wheelus U.S. Air Force Base in Tripoli, Libya. In 1967, the Six Day War broke out, and Kimi, Kim and Joe were immediately evacuated out of Libya. Joe was eventually re-assigned to Japan, and the Ferry family lived in Japan for the next 20 years. During that period, Joe was a business teacher at Zama American High School on the U.S. army base, Camp Zama, while Kimi was a homemaker who raised Kim and attended to all of her family's domestic needs.

Kimi was an excellent homemaker and most amazing cook. Though she would humbly respond to compliments by saying that her culinary creations were "simple country cooking", her food flavors could've given any Michelin Chef a run for their money. Her best dish was spaghetti with meat sauce and shiitake mushrooms, and friends of the family would often enthusiastically request it, if invited to dinner.

Not only did Kimi delight with her cuisine, she also impressed all who met her with her sweetness, sense of humor and extremely easy-going manner.

In 1988, Joe & Kimi retired in Bellingham, Washington, largely due to their daughter attending WWU at the time. Kimi and Joe would go on to live out the remainder of their lives calling Bellingham home.

In the final years of her life, Kimi developed dementia. The woman who devoted her entire life to caring for others, in the end, became a care recipient. Beginning with WWII, and on throughout her life, no matter what hardship Kimi faced, she always managed to stoically march on while looking at the bright side of things, and keeping a sense of gratitude. Dementia took so much away in her final days, yet the essence of what made Kimi "Kimi" was inviolate. Though dementia ate away her memories and took her ability to communicate effectively and function independently, Kimi's indomitable spirit and positive personality remained fully intact. Dementia severely limited Kimi's speech, but what she managed to say was invariably positive and appreciative. She always smiled and said, "Thank you" to those who provided care for her, and would consistently greet visitors with, "Good to see ya", and "Nice day, huh?!" Right up to very end, Kimi stayed sweet like her favorite food, ice cream.

Kimi is survived by her daughter Kim. Her parents and husband predecease her. She will truly be missed.

I have been blessed with the grace of your family. Not a day goes by that you are not in my thoughts. Your parents were incredible. Your mother an absolute gift. You did not fall far from the tree.

A beautifully written tribute. May you be comforted with such wonderful memories. Sending love to you, Lucy.

We miss you Kimi-san! You remain a true example of how to meet the challenges of life with kindness and grace. Even death is not to be feared by one who has lived wisely. どうか安(やす)らかにお眠(ねむ)りくださいませ  Take it easy and rest in peace

Kimi San, Rest In Peace! You were such a wonderful person, mom, wife and friend. You will be missed!