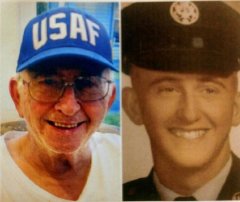 He was born to Ellis and Juanita (Buchanan) Green on March 13, 1945, in Bellingham, WA. He joined the United States Air Force in 1963 and was stationed in Lubbock Texas with the Air Police.

Larry met his wife-to-be at the Lynden High School and the Assembly of God Church in 1962. They were married on Oct 10, 1964 and started their family in 1966. They had three children.

During the VietNam War, Larry, his father and his uncle, Ray Bales, all worked at Uniflite, building boats. He then went to work at Lynden Glass in 1968 as a glazier. He started his own glass business in 1995 which he owned until he retired in 2008. He loved fishing and hunting, his dog, Harley and his grandchildren. He had a passion for music, especially old time country, bluegrass and Christian. He loved karaoke and would go up to the barn and sing for hours.

Larry loved his Lord and, even while suffering from Alzheimer's, he carried his Bible with him. When he wandered off, he might forget his shoes or coat, but he would have his Bible.

Larry's final resting place will be at Tahoma National Cemetery with his parents.

I Love You and miss you. I wish I could have made it down to say good by to you but couldnt get there in time. You now are free and have no pain or sickness I am so happy for that, So save the last dance for me and I'll see you sometime soon .