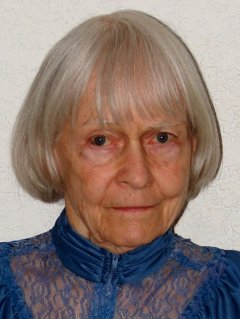 Lois Evelyn Franklin Campbell died peacefully at home in Bellingham, Washington at the age of 98, secure in her Christian faith. She was preceded in death by her parents, the Reverend and Mrs. Samuel Walsh Franklin, beloved husband Odell, older sisters Madge, Mary Catherine, and Eleanor, and younger brother Samuel. She is survived by sons Samuel and Robert, grandsons Peter and Derek, plus many nephews, nieces, and other relatives.
Lois grew up in Oklahoma in a Methodist family. She received her Master's degree in education in 1959, and her Ph.D. in Special Education in 1963, both from the University of Oklahoma. In Oklahoma she worked as a teacher of children and later a college professor, and then as a school psychologist in southern Louisiana. She was involved with education for the hard of hearing and profoundly hard of hearing for many years, and was a strong advocate of preparing such children to be an active part of hearing society, beginning with son Sam. She was very proud to see Sam receive his Ph.D. in Electrical Engineering in 1977. Later she also supported husband Odell and then son Robert in receiving Ph.D degrees.
As an artist she was proud to show visitors examples of her work in painting, drawing, macrame, Oklahoma red clay, paper folding, and other media. People asked for her drawings and paintings, but she never asked for money. One of her favorite things to do while traveling was fold jumping frogs from magazine inserts to give to children and others. Many of the frogs she folded could actually be made to jump several feet. Not only did she know hymns, but her knowledge of popular songs up through the 60s never failed to surprise people. Her memory for song lyrics rarely faltered, even after developing Alzheimer's. In recent years she loved reading joke books and taking people aback with puns and the like. She loved telling nurses taking her blood pressure to be sure to give it back, a joke which rarely failed to spark a bewildered look followed by ready agreement.
Around 1996, she and her son Sam joined Birchwood Presbyterian Church when they moved to Bellingham to be near Robert . She enjoyed English Country Dancing and singing with others at the Bellingham Senior Activity Center, dancing into her mid-90s, and singing to the last day. An English Country Dance party for her 90th birthday was one of the highlights of her time in Bellingham. She also enjoyed the people and especially the snacks at the Whatcom Chapter of the Hearing Loss Association of America meetings.
While still in Oklahoma, Lois worked with Laubach Literacy and was proud of her hands-on volunteer with Habitat for Humanity in Oklahoma as a tutor, trainer, and coordinator. Here in Bellingham, she volunteered with the Whatcom Literacy Council as a tutor.
The family wishes to thank the bath aides from Take My Hand At Home Care and Visiting Angels who often had her singing. We also thank the people at Adult Day Health, both in Bellingham and later in Lynden, who always put a smile on her face, and the people at the Northwest Regional Council involved in Area Agency on Aging work for all of their help and support.
Donations in her name may be made to either the Whatcom Literacy Council or Habitat For Humanity in lieu of flowers or other support.

I am very sorry for your loss. It was my privilege to be a guest in the Campbell home in Louisiana in 1973. I went to church with your family. When your mother learned that I like to sing she took me to the choir loft; introduced me as Miss Christine; and put a hymn book in my hands. I acquitted myself proudly by singing “Whispering Hope” with her.

Yes, Lois will be missed! She was a woman of such modesty and great spirit.  Sometimes we would make art together. “Lois.” I’d ask, “do you want to paint?” “No, I don’t paint anymore.” Yet when paint and paper were set before her, I would watch as an amazing portrait of the tree outside my window slipped out from her brush - not a replica, but an entity.

This indescribable essence and authenticity personified Lois. I believe her presence called forth to the dignity of heart in each of us.

Lois, you had a ready quip for us every time we met, and were always cheerful.  I wish I had known you longer, as you had an active mind and were still dancing not so long ago, which delighted Bob and me.    Your neighbour, Christine.