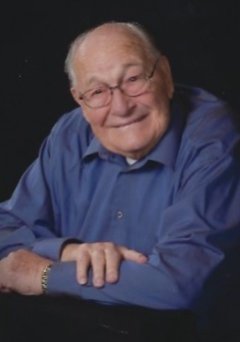 Reverend Louie Travis Rhoden Sr., age 87 saw the face of Jesus when he peacefully passed away surrounded by his loving family and friends in Bellingham, WA on July 11, 2019.

He was born in Charleston, Arkansas on April 1, 1932 to Nathan and Myrtle Rhoden. The family moved to Ventura, CA in 1936 where Louie spent the remainder of his childhood. He was the third of six children and is preceded in death by his parents and by four of his sisters, Christine Sadorus, Lila Ringsby, Suzzie Ross, and Dymple Stewart. He is survived by his sister Joyce Grafe (Chuck) of Glendora, CA.

Louie attended Ventura High School and excelled in sports and music. He graduated from Coulter Academy in 1951. He was a graduate of Biola College in Los Angeles, CA, where he served as Vice President of the Student Body. He received his Bachelor of Arts Degree in 1955.

For almost 70 years, Louie was known as the, “Peoples Pastor.” throughout his life, Louie was faithful to his calling. As a preacher he not only talked the talk, but he walked the walk. His life verse was Philippians 1:6, “Being confident of this very thing, that He which hath begun a good work in you will perform it until the day of Jesus Christ.” His life’s motto was “I’m Prayed up, packed up, and ready to go up.” It’s not surprising that Louie was born on April 1st. There were plenty of pranks and he was known for his sense of humor, joyous laugh, warm smile and amazing way of making everyone feel loved. And that’s no joke.

In lieu of flowers, donations may be sent to OC International, PO Box 36900, Colorado Springs, CO 80936-6900.  Please make checks payable to OC International and note that your gift is for the support of Edwin and Evie Martinez, in memory of Reverend Louie Rhoden.

We are so thankful that your family had this man as a husband, father, and grandfather.  He will be missed, our sympathy to your family.  From John and Fran.

Oh, sweet Louie.  I only knew you for a few short years but the imprint you left on my heart was deep! It speaks so much of your soul. I’m so lucky to have witnessed you baptizing Heather, Lauren, Cole, and Luke. It was one of the most beautiful things I’ve ever seen!  Your profound statement you made that day that stuck with me was, “I’m not home, I’m just passing through.” Now you’re home after an impactful journey to everyone you reached! Love and hugs to you and all of your family whom I love so dearly!

I met Louie when his daughter, Rebecca (Becky to me) became a friend in Hanford. I was fortunate to spend time with him and Marilee on several occasions...even a couple times in Paso Robles. It was easy to see where Becky and Beth  got their wonderful personalities and love for the Lord by just being in his presence. I send my heartfelt condolences to the entire family.  He will be in your hearts forever and although missed like crazy I know you will find strength in the love support of each other.  Wish I could be there for the service..my thoughts and love will be with you   Cristy