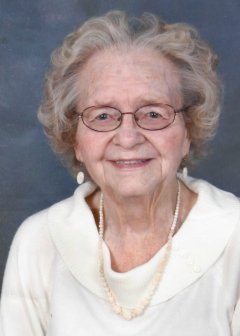 Born:
Tuesday, July 21, 1931
Died:
Saturday, June 17, 2017
Birthplace:
Sterling, CO
Service Information:
Burial service will begin at 10 a.m., July 8th at the Bow Cemetery. The Celebration of Lucille's Life will then be at 11 a.m. at Edison Lutheran Church in Bow followed by a Luncheon Reception. Attendees are encouraged to bring any quilts from Lucille for display in the sanctuary.

Lucille Alice Peterson was blessed to go peacefully home with her Lord Saturday, June 17, 2017 in her home.

Lucille was born on July 21, 1931 in Sterling, Colorado, the daughter of Fred and Minnie Arians. In 1940, the family moved to Bow, WA. Lucille graduated from Burlington High School in 1949 and later business school. She worked at the Burlington Hospital in accounting and later for the Welfare Office. She also worked for years shucking oysters at Rock Point Oyster Company.

One day a young farmer, Warren Peterson, delivered potatoes to her parent's farm. Soon after, on May 9, 1954, Warren and Lucille were married. Lucille became stepmom to Kathy, Bev and Betsy. Soon after they added three more children to the family with Paul, Julie, and Steve.

Lucille was know for her love of God, family and community. Her loving, caring attitude was displayed in her behind-the -scenes service in the kitchen of Edison Lutheran Church. She served countless coffee hours and soup suppers, as well as meals for new moms and for busy families.

She was drawn to children, helping in the nursery, sewing prom dresses for foster girls, and constantly hunting for sales on items for comfort kits for kids in need. In addition, she served her community through volunteer work with the Red Cross, Skagit Symphony, Daughters of the Pioneers, and the Flower Power Program at Madison School in Mount Vernon.

Lucille worked as an Assistant Cook at Edison Grade School. She was a brave soul, working as the winch operator for her husband's logging operation. Later, she worked as a Postal Clerk at the Blanchard Post Office/Grocery/Gas Station. Upon its closing, she moved to the Bow Post Office where she received the Volunteer of the Year Award for her service to the community. She retired after 20 years.

Lucille enjoyed sewing, quilting, reading, ME TV, lunch with the '49ers', hollyhocks, the symphony, breakfast at the Edison Cafe, trips to Alaska to visit her brother, great fish stories, and a really good joke.

In 2007, she suffered a stroke which left her weak and unable to speak. While her three kids pitched in to help, Chela Soto and Maria Torres were her first full-time caregivers, followed by her granddaughter, Elizabeth Edwards and her husband, Andrew.  Later, her son, Paul and wife, Laurie took her on a 4-year adventure to live with them on Waldron Island. She loved island life and the boat and ferry rides.

Lucille was preceded in death by her parents, her husband Warren, and her brother Albert Arians.

Lucille's family would like to thank Island Hospital and Cancer Center, Saint Joseph Rehabilitation Center, and Skagit Hospice. A special thank you, also, for the love  and concern shown by Pastor Larry Olsen and the Care Team at Edison Lutheran Church.

Lucille would have been overjoyed by any memorials being sent in her name to Edison Lutheran Church, Skagit County Red Cross, or Skagit Hospice.