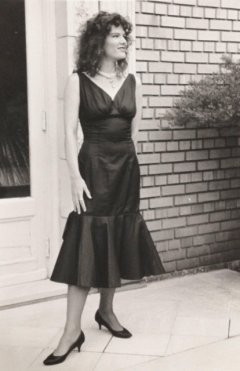 Born:
Friday, June 19, 1964
Died:
Thursday, July 21, 2022
Birthplace:
Oakland, CA
Service Information:
A burial ceremony for those closest to her will be held on Monday August 15, 2022 and a picnic celebrating her life will follow at Whatcom Falls where our family friends and those who knew her are welcome– we will put out balloons near the picnic shelters so you can find us.

Lurene Kathleen Gisee, née Helzer, was born in Oakland, CA on June 19, 1964, the first child of Sharon Kathleen Hughes and Jack Robert Helzer. She grew up in the stereotypical California style with pool parties blasting Beach Boys music in the backyard, neighborhood-wide hide-and-seek games, and ballet and baton lessons after school. Although raised in her mother’s Catholic faith, she was open-minded to all major world religions throughout her life and enjoyed studying and debating their tenets.

Raised primarily in California as a child, she stayed in Washington for a time during her adolescence after her parents’ divorce. But she always remained a San Francisco girl at heart, frequently visiting her grandparents nearby. Her lifelong BFF Janet’s parents, Rosie and Dave, always had a spare room for her when she needed it.

Very self-sufficient, she supported her way through San Francisco State University while playing Wonder Woman at parties. Her year abroad in Jerusalem at Hebrew University was life-altering and she never lost her fascination for the culture and politics of the region. She often recounted adventurous stories from her time in Jerusalem, traveling to Egypt, Syria, and Lebanon, riding camels at the Great Pyramids, or descending into the Dead Sea, and she returned years later to be reunited with her beloved Israeli friends. Lurene continued to travel whenever she could and particularly loved the desert, Death Valley being her favorite place on earth.

As a journalism student, she studied international affairs, but it was the early career, local, special interest stories where she found her footing and her satirical sense of humor emerged. A natural storyteller, her love of laughter was contagious. She worked for multiple newspapers like the East Bay Journal, the Berkeley Voice, and was editor-in-chief for the Chabot College Spectator and was proud to have her Letter to the Editor published in the New York Times in 1997, a feat none so easy. Lurene loved B/W photography and met her dear friend Lloyd (as well as others,) a gifted photojournalist at the Daily Review– over the years they shared adventures, stories, tag lines, negatives and a lens of the world which was always fascinating to see. She was immeasurably shaped by her experiences while a reporter, such as attending the Democratic National Convention, and it was apparent how dear her vocation was to her.

Outside of work, she remained fit with a vegetarian diet; she loved Middle Eastern cuisine and Turkish coffee. She was always walking the hills of her Pacific Heights neighborhood until her MS diagnosis took that away from her soon after the events of 9/11/01. She had visited the World Trade Center years before and it was particularly a painful time in history for her. She quit smoking when she became sick.

Brutally attacking the memory and speech centers of her brain, the disease took away her livelihood all too soon. She was born deaf in one ear and much later in life got a cochlear implant. She would often say how her illnesses were invisible to those who didn’t know her, and they didn’t recognize her as disabled since she wasn’t wheelchair bound. (A reminder that not everyone’s illnesses or struggles are visible.) She suffered from grand mal seizures and many more uphill battles… all of which she fought extremely hard. She frequently practiced what she called “brain gym” exercises to keep all areas of her brain conditioned.

She moved to Bellingham to be closer to her family and spent her last twenty years of life there. In Bellingham, Lurene became a member of the Republican party and volunteered with them locally as the York neighborhood representative. How she loved debating politics and generally being involved!

She loved classic rock, Styx being her favorite band, but also loved international music, campy movies, listening to podcasts and world news, reading of all types, and listening to and practicing foreign languages. She enjoyed dressing fancy, designing hats and recently thought that might be a fun business venture for her.

On a daily basis, Lurene visited with some kind neighbors, social workers, a caregiver, and really, truly liked the folks at the pharmacy. But more than anything, she liked animals and truly adored each pet she ever had. Her gorgeous kitty was adopted quickly by family members after her passing. And she often repeated that she loved her family. She wanted everyone to know she loved them, and she wanted us all to study and exercise our brains.

Lurene was fierce, she was unique, she was a force. She was beautiful, extremely strong and clever. Yet she became increasingly fragile as her illness progressed. We can only imagine that Cleopatra was calling her from beyond the veil… telling her it was time to dress up and dine with her ancestors, leave behind the body that was betraying her, and it was time to rest with her idols: Winston Churchill, Charlie Chaplin, Albert Einstein, Marilyn Monroe, and Grandma and Grandpa. Yes, Wonder Woman, it is your time to rest.

She is survived by her sisters Kathrena Halsinger and Melissa Helzer Lukeris and her four dear nephews Yggdrasil, Kassio, Ashton and Kieran. Her surviving extended family by marriage includes Kai, Gabriel, Jon, Lissa, her five step siblings, three aunts, four uncles, and numerous cousins. She will also be missed by her life-long best friend Janet, her namesake Brenda Lurene, Lloyd and Leanne, her many pen pals, former beaus, and long-time friends. Her beloved grandparents, Jim and Lois, her parents, Jack and Sharon, and stepfather Harry Stafford preceded her in death. She missed and grieved them greatly, now she is at peace with them, and we must honor her with our hearts and memories. She will be laid to rest at Woodlawn Cemetery in Ferndale beside her foster grandparents Clifford and Agnes Joyner. A burial ceremony for those closest to her will be held on Monday August 15, 2022 and a picnic celebrating her life will follow at Whatcom Falls where our family friends and those who knew her are welcome– we will put out balloons near the picnic shelters so you can find us.

If you wish to honor her legacy by donating in her name, we would recommend the following organizations, or any other organization you feel she would be passionate about: