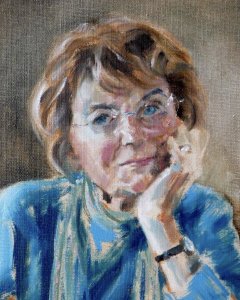 Born:
Wednesday, November 11, 1936
Died:
Friday, June 26, 2020
Birthplace:
Corvallis, OR
Service Information:
A memorial gathering will be held at a later date, when it is once again safe to gather.

Mary Adell Froderberg, age 83, died peacefully in the early evening of June 26th. She is dearly missed by all who knew and loved her.
Mary was born in Corvallis, Oregon, to Lyall and Katherine (Redfield) Searing. Her father was the head of milk sanitation for Seattle and King County, and her mother a homemaker and athlete. She was raised in the Ballard neighborhood of Seattle, and spent much of her childhood and young adulthood with her family on her parents’ boat exploring the waters of the Pacific Northwest and British Columbia. Mary was very close to her Irish grandmother and proud of her Irish heritage, returning to Ireland many times throughout her life.
Mary was, first and foremost, an artist. She had an eye for detail, and worked in multiple media, honing her craft over decades. Her landscape art, which focused on the Pacific Northwest, graces the homes of her friends, family, and the many collectors of her work.
After high school, Mary earned a degree in Art at the University of Washington where she met her future husband, Albert Froderberg, also a Ballard native and a graduate student in mathematics. They married in 1962, and spent 2 years in Göteborg, Sweden where Al taught at Chalmers University. In 1965, Al took a position as a math professor at the University of British Columbia, and the couple moved to Vancouver, B.C. for 2 years, where their daughter, Annie, was born. They moved twice more, first to San Diego, and finally to Bellingham, where Al spent the next 45 years at Western Washington University.
Mary began her career in commercial art, drawing matchbook covers, and designing grocery ads and signs for various businesses. With marriage, and the multiple moves for Al’s career, Mary stopped doing art for a while, until they returned to Washington state and made Bellingham their permanent home. As Mary described in a video about her life, “This area is the most beautiful place in the world, it’s a landscape painter’s paradise.” Over the next 50 years, Mary frequently painted outdoors with other well known Pacific Northwest artists including John Cole and Tom Wood. Her style evolved over the decades as she moved from colored pencil, to pastels, and finally to oils. Al designed and built her a beautiful art studio in a former toolshed on the property. With its stunning view of Chuckanut Bay, it was the envy of her artist and non-artist friends alike. They remained in their house on Chuckanut Drive for 51 years.
Mary was part of the establishment of the Bellingham art community from its early years, first showing her work in a co-op gallery at the Garden Street Methodist Church in the 1970s, and later much more widely as other galleries appeared. Throughout the years this group of artists met regularly to paint plein air, attend gallery openings, and socialize at summer picnics. She traveled to Europe many times to paint with groups of artists on trips organized through the Blue Horse Gallery.
Her many friends captured Mary best. “She was so very at home in the studio that Al had made for her. The view seemed such a terrific reflection of her wild and beautiful nature. Something about salt water was so close to her…the gleaming cold water, the view outside the studio to the islands. I admired her love of tramping around in the woods with paints, she was so connected to the wild and natural world. She was not fussy about anything. Caring yes, but not contrived. Mary was a terrific listener and I counted on her positive and loving outlook on life.” (Leslie Strong) “Mary has always had this incredible gift of lightness and joy that was contagious - she made every person she was talking to feel better, feel some of her own depth of delight. Part of that came from how deeply she saw things - it seemed as if she saw beyond looking, to genuinely receive what the world was presenting to her and capture that in her art.” (Dana Jack) “Mary was a lovely and gracious lady, one of those rare people who caught your eye with her beauty and then proved to be as beautiful inside as out.” (Jo Dereske) “She approached life with the heart of an artist, which means with more gusto than some would consider common sense” (Julia Kerl) “What impressed me most was her fearlessness and adventurous spirit.” (Susan Bennerstrom)
In her last months, as her health declined, Mary was cared for in her home by her daughter, Annie, and grandson, Kieran. She spent the last 2 weeks of her life at Whatcom Hospice House, where she received outstanding care. There, her friends were able to visit at her bedside, hold her hands, and be with her in the hours surrounding her death.
She was a loving mother and grandmother, and a dear friend to many. Her gentle, sometimes chiding, always loving, spirit lives on in her daughter and grandchildren. We will cherish her memory, and continue to enjoy her remarkable art, evoking the beauty of the Pacific Northwest and her love for it.
She was preceded in death by her husband, Albert, and is survived by her daughter, Annie, grandsons Kieran and Declan and daughter-in-law, Renata, sister, Marty Kuala, and many cousins, nieces and nephews.

Gifts in memory of Mary may be made to the ‘Albert J. Froderberg Memorial Scholarship’ at WWU, 516 High Street, MS-9034, Bellingham, WA 98225 or www.wwu.edu/give