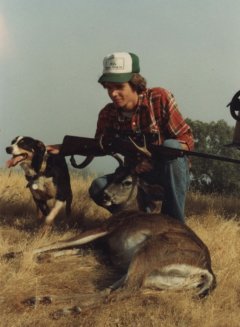 Michael Wayne “Mike” Petersen, age 51, of Maple Falls, WA, passed away on Saturday, November 12th at his home. Mike was born in Healdsburg, CA on January 26, 1960, to Alfred “Pat” and Sylvia “Babe” Petersen. Mike will always be remembered for his love of the outdoors. An avid hunter, Mike was at home in nature and spent many hours in the woods and hills of Sonoma County with the family dogs, hunting deer and hogs with his Dad. His family will always remember the time Mike came home from setting chokers in the woods with a wild piglet in his lunch box. “Snoop” grew into a rather large family pet! After relocating to the Pacific Northwest, Mike spent time working for a tree service and also working the fishing boats. This began another phase of Mike’s love of nature…the ocean.

Mike was preceded in death by his mother, Sylvia Petersen and his hunting dog, “Tiny”.

~ Forever in our hearts!