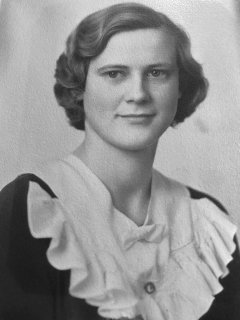 One of the last members of a pioneer family has died at age 105. Mildred Houser Snydar was born in Concrete, Washington on November 10, 1916, but moved shortly after to Bellingham. She lived most of her life in Whatcom County. Her Mother Grace died at a young age leaving three small children. They went to live with their Grandmother, Mary P. Houser, at Fort Bellingham overlooking Bellingham Bay.

Mildred and her siblings, Rex and Mary Jane, attended Marietta School, Roeder and Whatcom High. Mildred was class vice president at Roeder and school tennis champion at Whatcom. She said she wasn’t a very good player, but she could run.
Mildred met Frank Snydar at a dance. But they nearly missed each other when Frank sent a letter asking her on a date with her cousin Francis Winetrout. He forgot about the mail, but Mildred recovered the soggy letter while doing the laundry. She took a bowl of strawberries to the Snydars’ farm after finding out where Frank lived.

They were married in 1937 and lived on the Graveline Road before their nearly 70 years on Ten Mile Road. They were in the dairy business, milking twice a day. Silos had to be filled and barns loaded with hay for the winter months.
Mildred’s ambitions were to be Mother to her daughters and to support community activities. She attended PTA meetings at Meridian Schools. She collected for the Red Cross and belonged to the Laurel Home Demonstration club. She had ideas for floats in the Old Settlers’ Parade and barn dances. She organized one float, made of straw bales, with the theme of The Old Woman in the Shoe. All the young people in the neighborhood dressed in crepe paper costumes to ride on the float . Tami Kenoyer Johnson was Queen of Hearts.The float won $50 first prize and Mildred used the proceeds to buy a record player and hire a dance instructor.

She believed everyone should learn to dance.
She employed the domestic arts. She gardened, painted wallpapered and sewed. She painted the barn at least twice. One Christmas she made 15 cowboy/girl shirts for neighbor kids. It was the era of Roy Rogers and western movies.
Mildred always went all out for her daughters’ activities. If they were in the drill team in local parades she darted from one block to another to start the clapping. When her daughter Marilyn was crowned Blossomtime Queen in 1958, Mildred was taking photos. When Marilyn became Washington State Dairy Princess, she was chaperoning, driving, and coaching as they traveled around the state.

Mildred yearned to travel. She and Grace Kenoyer toured around Europe. She and Kathy took the train and packed sandwiches to visit Washington, D.C. when Marilyn had an internship with Senator Henry M. Jackson. Experienced travelers Mildred and Kathy visited Marilyn and family when they were living in Portugal.
She took care of her cousin Francis Winetrout after Frank died. She was grateful to Francis since he proved so much fun in her childhood by inventing games and building a bench on the Houser ancestral home off Marine Drive. The Ten Mile Road farm land was sold in 2011 to Roger Blok, a neighboring farmer; and later the house, barn and buildings to his son.
Mildred spent her last years at Meadow Greens in Lynden.