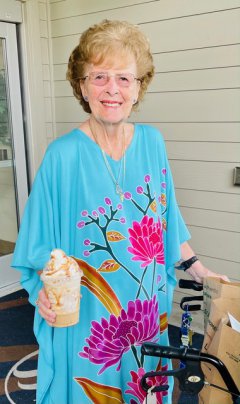 Born:
Saturday, September 5, 1936
Died:
Saturday, May 22, 2021
Birthplace:
Cereal, AB, Canada
Service Information:
A Celebration of Life will be scheduled for later this summer.

Mydra Caldwell was born on September 5, 1936 in Cereal, Alberta to Lloyd Shuler and Inez Gravette.  She and her beloved brother, Robert Shuler, grew up in the Calgary area.

In 1957 she married the love of her life - Ray Caldwell.  Their life together took them and their two children, Michael and Tara, to Seattle, Washington, and then to Hubbard, Ohio.

Upon Ray’s passing in 2008, Mydra moved into the Spring Creek community, where she made many dear friends.  Unfortunately, in April 2021 she was diagnosed as having cancer and passed away much too quickly the following month.

In passing, she has reunited with her beloved husband Ray, her amazing best friend Deirdre Becker, and Deirdre’s daughter Lynne Shorey.